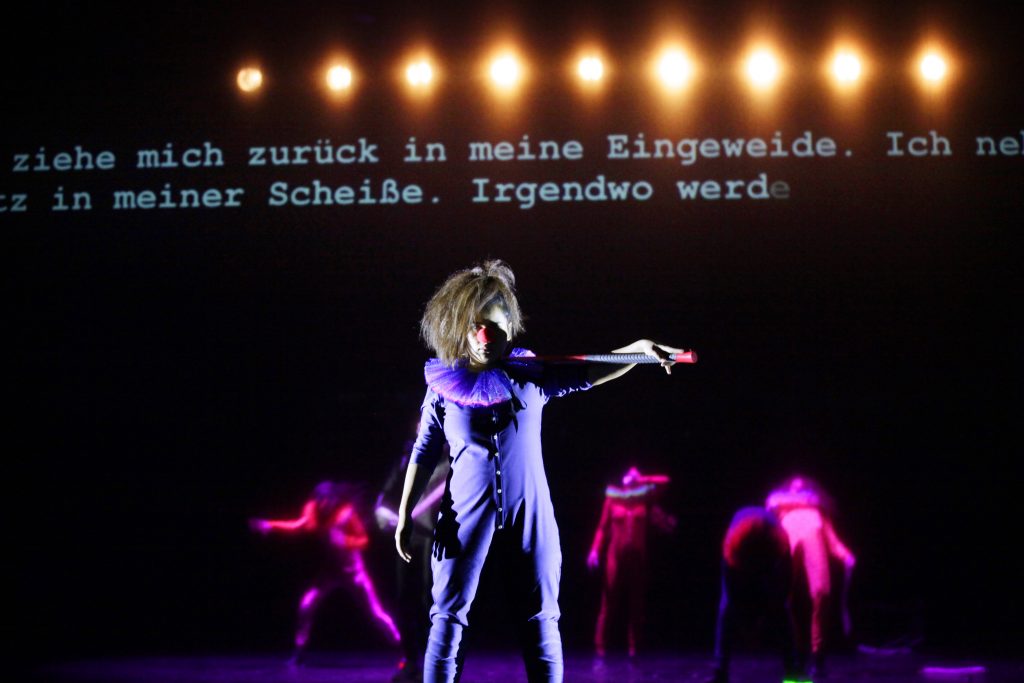 Dr Margherita Laera, Senior Lecturer in Drama in the School of Arts, and Professor Peter Boenisch from The Royal Central School of Speech and Drama, are organising a conference entitled ‘Performing Multilingualism in Europe and Beyond: Migration, Globalisation, Utopia’ with the participation of Gintersdorfer / Klassen and Maxim-Gorki-Theater, Berlin. The conference will feature Professor Yana Meerzon (University of Ottawa) as keynote speaker, and will be hosted by the School of Arts on Friday 13 September 2019.

In an increasingly inter-connected world characterised by flows of people, goods and capital, multilingualism has become a feature in many social environments, highlighting the importance of translation in human communication. Whether enforced by financial waves, mass movement, tourism, education systems or colonialism, speaking multiple languages has become a feature of increasing importance in our societies. How do theatre and performance makers deal with multilingualism?

In the UK, the population is made up of 13.5% foreign-born and 8.9% non-British citizens (Migration Observatory, 2015). Still, multilingual theatre and performance in the UK is rare and mostly confined to the fringe theatre sector. Experiments such as those by Nina Raine (Tribes, 2010), Simon Stephens (Three Kingdoms, 2012) and Katie Mitchell (The Forbidden Zone, 2014) remain few and far between.

Elsewhere, particularly in continental Europe, Canada and Asia, the genre of multilingual theatre has gained new currency in the context of globalization, international mobility and movements of migration. Practitioners like Luk Perceval, Jan Lauwers, Anestis Azas, Michel Tremblay, Krzysztof Warlikowski, Robert Lepage, Lola Arias, Angélica Liddell, Fausto Paravidino, Ong Keng Sen, Robert Wilson and others have experimented with multilingualism. Under the artistic directorship of Milo Rau, National Theatre Ghent’s 2018 manifesto proposed ten commandments for a ‘theatre of the future’, where number six prescribes that at least two languages must be spoken in any given production. A number of European theatres, such as the Maxim-Gorki-Theater Berlin, had started long before the refugee situation of 2015 to foster cultural diversity and multilinguality within their ensembles, integrating exile artists from Syria, Palestine, Afghanistan and elsewhere (not all of them refugees), and allowing multiple languages to interweave in performance. In the work of these artists, multilingualism can perform both ideas of inclusivity and exclusivity, and signify both utopian and dystopian worlds.

Meanwhile, scholarship on multilingual theatre has been intensifying in recent years, but the field is still very much under-researched. Marvin Carlson’s Speaking in Tongues (2009) prompted colleagues to think about these practices, their histories and development in contemporary theatre. Since then, special issues of Linguistica Antverpiensia, New Series. Themes in Translation Studies (2014) on multilingualism in film, theatre and opera, and the special issue of Modern Drama (61.3, 2018) on multilingual theatre in major world cities have advanced the horizons. Linguistic diversity in the arts and everyday life is the focus of ‘Creative Multilingualism’, a UK Arts and Humanities Research Council-sponsored research project based at the University of Oxford, part of Open World Research Initiative. ‘Creative Multilingualism’ has co-founded this conference and the research project of which it is part, headed by Prof. Peter Boenisch (co-I, Royal Central School of Speech and Drama, London, and Aarhus University, Denmark) and Dr Margherita Laera (PI, University of Kent, UK).

This conference seeks to stimulate an exchange between UK theatre makers and theatre artists from overseas, who engage with multilingual performance practices in the field of theatre dramaturgy, playwriting and performance-making. Our objective is to begin to chart the ‘state of the art’ of both advanced creative practice and academic discourses on multilingual theatre, and to map out core issues and problems for future research. We are interested in hearing the perspectives of artists, scholars and audiences alike.

Topics may include, but are not limited to:

The organisers invite the submission of 300-word proposals for 20-minute papers by 6 May 2019.

Please send your proposals to: performingmultilingualism@gmail.com