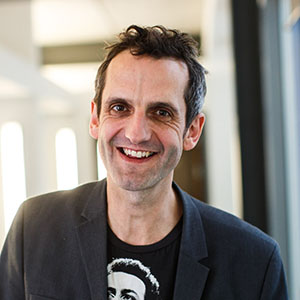 Dr Oliver Double, Reader in Drama within the School of Arts, will feature of the next episode of the BBC documentary series imagine…, which focuses on comedienne and national treasure Jo Brand. The episode will be broadcast on BBC1 this Monday, 28 January 2018, at 10.45pm.

Jo Brand is a familiar face from regularly presenting BBC1’s Have I Got News For You and Channel 4’s An Extra Slice.

Brand first burst onto the nation’s largely male stand-up comedy scene in the 1980s – dressed in baggy black outfits and Dr Martens boots, and calling herself the Sea Monster. In doing so, she revolutionised what women could be – and say – on stage.

The documentary is presented by Alan Yentob and explores Brand’s working-class background, from a teenage tearaway to a psychiatric nurse. Olly is one of several contributors appearing in the programme. Other luminaries that will feature in the programme include Peter Capaldi, Alan Davies, Victoria Coren Mitchell, Mark Thomas, Mary Beard, Morwenna Banks and Ian Hislop.

The programme will be available on the BBC’s iPlayer after broadcast here:
www.bbc.co.uk/programmes/b0c1wkzc