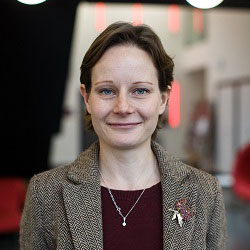 Dr Helen Brooks, Reader in Theatre and Cultural History in the School of Arts, has featured in a documentary on Untold Stories of World War 1. The documentary, presented by historian Dan Snow for the digital channel History Hit, premieres today, 1 November 2018.

The ambitious documentary is funded by the Arts and Humanities Research Council (AHRC) and draws together expertise and material from 26 universities and organisations. Helen contributed her expertise from her research as part of the Great War Theatre project and her involvement as a co-investigator on Gateways to the First World War: an AHRC-funded consortium for public engagement with the centenary of the conflict.

As well as exploring the plays that were produced during the conflict, the documentary also features the use of stately homes as hospitals, uncovers material from German photographer Käthe Buchler who documented her hometown during the war, and examines an excavation of a military base.

The trailer can be viewed below, or via the following link:
https://youtu.be/Img1sBuh0X8