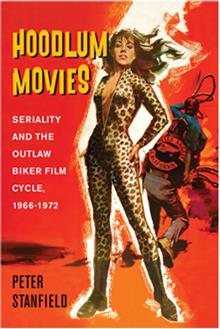 You are warmly invited to attend Professor Peter Stanfield’s Professorial Lecture, which will be on his latest research project, Hoodlum Movies: seriality and the outlaw biker film cycle, 1966-1972.

From The Wild Angels in 1966 until its conclusion in 1972, the cycle of outlaw motorcycle films contained forty-odd formulaic examples. All but one were made by independent companies that specialized in producing exploitation movies for drive-ins, neighborhood theaters, and run-down inner-city movie houses. Despised by critics but welcomed by exhibitors unable to book first-run films, these cheaply and quickly made pictures were produced to appeal to audiences of under-educated mobile youths. Plagiarizing contemporary films for plotlines, the cycle reveled in a brutal and lurid sensationalism drawn from the day’s headlines. Disreputable and interchangeable these films maybe, but their lack of cultural legitimacy and low ambition is a large part of the rationale for this study; inviting questions about seriality and film cycles that are otherwise ignored in histories of 1960s and 70s American film. Hoodlum Movies explains why and how these films were made, who they were made for, and how the cycle developed through the second half of the 1960s before coming to a shuddering halt in 1972.