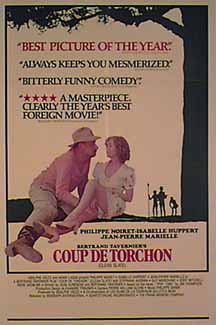 On 19th August 2014, French film director Bertrand Tavernier wrote to a University of Kent lecturer asking him to convey a message to Kent’s Film students. This is the letter:

I was in Canterbury once for a film festival. I liked the city and the countryside. For many years, I have been a fan of a superb Powell and Pressburger film, very underrated, called A Canterbury Tale. A beautiful meditation on what is national identity (nothing to do with nationalism), the importance of roots, the past. I love their work, especially A Matter of Life and Death, The Life and Death of Colonel Blimp, Black Narcissus, Peeping Tom. And A Canterbury Tale is with those films including The Red Shoes. It has an incredibly innovative visual transition to film the change of period.

What can I say to your students, except they should know all the films of Powell, David Lean, the masterpieces of Carol Reed, Odd Man Out, The Fallen Idol, The Way Ahead, The Third Man, but also discover lesser known directors such as Harry Watt, Alberto Cavalcanti (Went The Day Well? Dead of Night), the great and unique Robert Hamer (Kind Hearts and Coronets, one of the greatest satires about the ruling class, It Always Rains On Sunday), Alexander Mackendrick.
To fight against the most insidious, evil, corrupting dictatorships, the dictatorship of time and worst, the dictatorship of ignorance, they must realise that an “old” film is not a dead film. Chesterton speaks about the democracy of the dead. They have a lot to tell us if we take the time to listen. Jorge Luis Borges wrote that when he reads something new, he first asks himself if this work is good enough to become old, to become a classic.

A black and white film is not horrendous or dated. Some films of the 30’s, 40’s are incredibly modern in the way they approach some subjects. Some pre-Code films (Heroes For Sale, Wild Boys of the Road, Baby Face, Bombshell) could take place today. How they were fooling censorship before the Hays Code was really imposed.

So be passionate and curious. See all kind of films. See French films (Renoir, Gremillon, Clouzot, Tati and modern directors), Japanese, Korean films. Discover other cultures. You will see that many films criticised the institutions, attacked the lies which are still propagated. See the films about WW1: Paths of Glory, The Big Parade, King and Country, Les Croix de Bois, La Grande Illusion and my films Life And Nothing But, Capitaine Conan. See another film I did about the way the writers, directors, technicians in the French cinema tried to survive during the Occupation (Safe Conduct). See those Italian comedies and dramas (Paisa, Open City, Umberto D).

Against those dictatorships passion and curiosity are not only shields, they are also, like many films, works of art, weapons of mass construction.

with my warmest regards