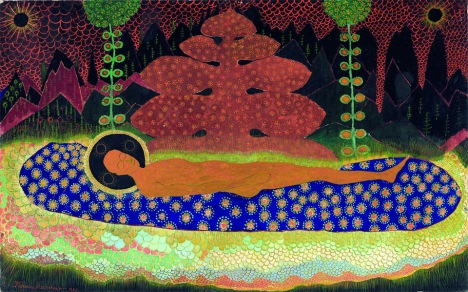 Tate Modern in London is currently staging a once-in-a-lifetime exhibition of work by the great Russian modernist Kazimir Malevich.  The reviews thus far have been ecstatic. The combination with Henri Matisse’s late cut-outs makes the gallery an unmissable destination this summer.

Professor Christina Lodder in History of Art is one of the leading authorities on Malevich and Russian modernism in general. She has contributed an essay to the Tate’s catalogue for their show, and is conducting a gallery tour on 22 September (already sold out).  Christina has published extensively on his work and was recently elected President of the Malevich Society, a New York-based foundation which sponsors academic research on the artist and his times.

Malevich is best known for his Suprematist abstractions, dynamic arrangements of flat coloured planes floated against white grounds (a description which conveys nothing of their beauty and visual impact). The style was launched in 1915 by the famous ‘Black Square’, hung like an icon across the corner of the space and announcing the artist’s liberation from traditional figuration. He subsequently adapted his art to express his commitment to the 1917 Revolution, but in the end had to compromise with the Stalinist demand for legible figuration.  The exhibition brilliantly captures the full arc of his development.