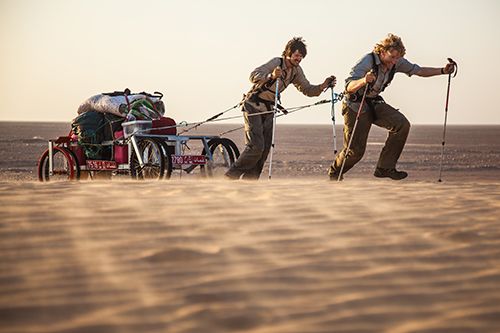 Adventurer and expedition cameraman Leon McCarron graduated with a BA in Film from Kent in 2008 and is returning on Thursday 27th March at 7pm to screen his latest feature film, Into the Empty Quarter, at the Gulbenkian Cinema.

Following in the footsteps of their hero, explorer Wilfrid Thesiger, adventurers Alastair Humphreys and Leon McCarron have made this beautifully shot, thought-provoking film of their 1000 mile trek into the world’s largest sand desert: the Empty Quarter of the Arabian Peninsula. Their trip is low-budget, and hastily planned; unable to afford camels, they hope to drag a homemade steel cart through the searing desert heat. Thesiger made his journeys between 1945-50, so this is a modern day retelling of a classic story, but Humphreys and McCarron share with him the heat, hunger and thirst, the endless dunes, the silence and the nights filled with stars, the local hospitality – and it makes for a resonant, energetic and at times very funny travelogue.

For further information and details on booking tickets, visit: http://www.thegulbenkian.co.uk/events/cinema/2014/March/2014-03-into-the-empty-quarter.html