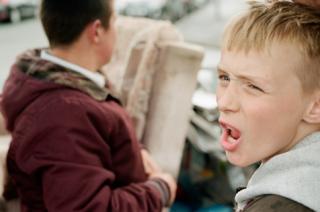 A film by Clio Barnard, Reader in Film, was chosen as one of only two films to represent the UK in the Directors’ Fortnight line-up at the 2013 Cannes Film Festival. Titled ‘The Selfish Giant’, the film is an adaptation of Oscar Wilde’s famous short story of the same name. Now set in a housing estate in Bradford, it tells the tale of two outcast teenage boys who get caught up in the world of copper theft.

The film received critical acclaim with Edouard Waintop, Artistic Director of the 2013 Festival, commenting: “I saw it in London and wept afterwards…I still can’t talk about it without tears coming to my eyes.”

Considered the world’s most important film festival, Cannes aims to draw attention to and raise the profile of films, as well as celebrating cinema at an international level.

Clio’s film was also voted the 13th Most Exciting Movie at Cannes by Empire magazine!

Further information, including news coverage about The Selfish Giant, can be seen here: