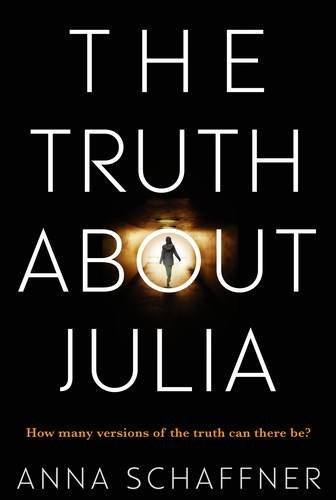 In June 2014, Julia White – a beautiful and intelligent young woman – blows up a coffee shop in central London, killing twenty-four people before turning herself in to the police. Apart from publishing a potentially ironic manifesto, she refuses to explain the reasons for her actions.

Clare Hardenberg, an investigative journalist, has been commissioned to write a biography of Julia but at the start of the novel she is on her way to prison herself. What has brought her to this point?

‘What Schaffner shows so cleverly in this gripping, timely novel, is that there may be no one single truth; there may be many little truths, or possibly none at all and what there is is always open to interpretation.’ Janette Wolf in i-paper (April 2016)

‘…this first novel is original and beautifully written.’ Jessica Mann in the Literary Review (April 2016)

‘The Truth About Julia has many of the hallmarks of a traditional thriller – there is a crime, and investigation, a character at the heart of the story seeking the truth, and there are mysteries that need to be solved. Still, readers should approach this not as gripping, airport fiction but as an intellectual challenge. The subject matter is steeped in political theory and academia, but with the engine of a strong narrative to keep us hooked.’ Mike Stafford, Edge Magazine (April 2016)

‘Schaffner’s debut is a well-written and intriguing portrait of two women that invites questions.’ Jade Craddock, The Sun (May 2016)

The Truth About Julia was also recommend in the following magazines: Vogue, Closer, Heat, and Grazia South Africa. ​