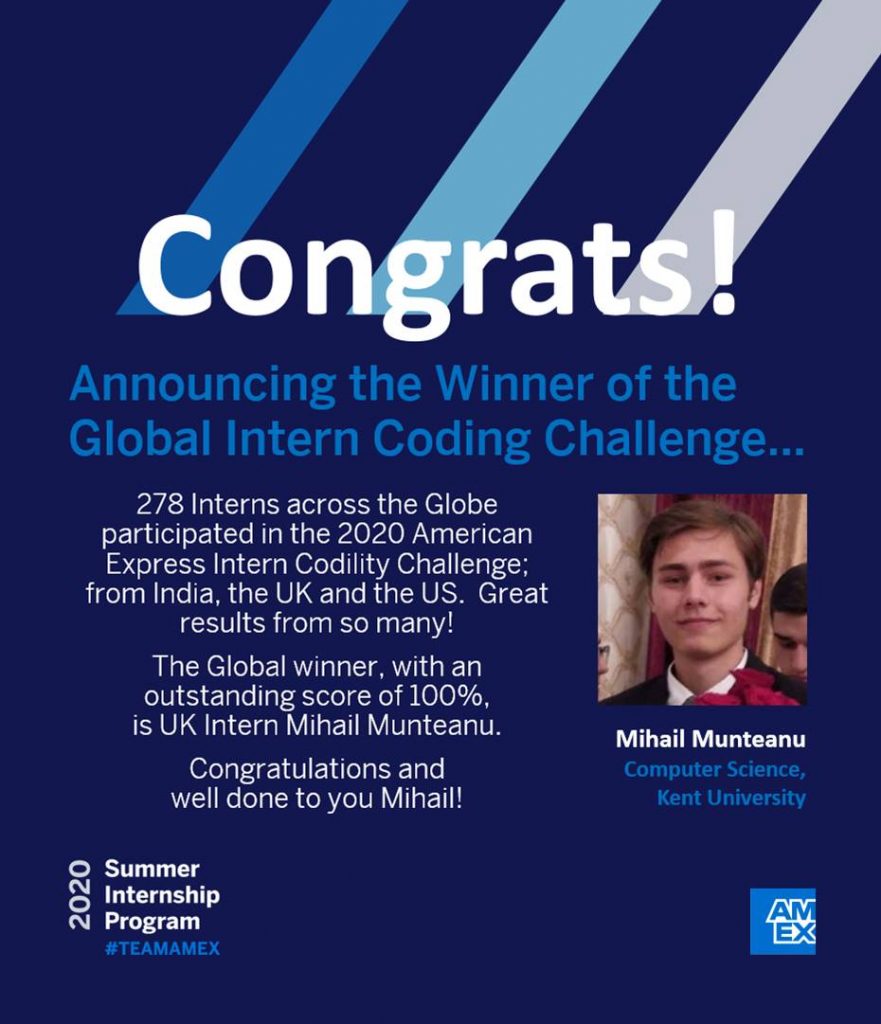 BSc Computer Science student Mihail Munteanu took first place in the American Express global intern coding challenge while on an internship at Amex. In total, 278 interns attended the challenge from the UK, the US and India.

Mihail said ‘We were given 3 algorithmic problems and were asked to solve them using the most efficient way. In order to solve these problems we had to be familiar with data structures, algorithms and time complexity, luckily enough all of these were taught at Kent. By having a great day, I was able to solve the three problems and be the only contestant with a 100% score. I was awarded an Apple watch for being the first in the UK and a Nintendo switch for being first globally.’

Mihail found out about the six-week American Express summer internship through the School of Computing Employability newsletter. Mihail said ‘The internship made this summer one of the best experiences ever. Amex is the gold standard for how a company should treat their employees. The amount of experience I got is collosal. I got to work with another team of interns on a project which aimed to solve a real life problem using some of the most modern concepts and technologies. We successfully implemented it, and from speaking with other engineers they mentioned that what we did will be in place for 30-40 years. It’s crazy how a company trusts interns with such important problems, but at the end of the day we weren’t just interns, we were a part of the Amex family. I got to work with engineers with over 20 years of experience who always treated me like a fellow senior developer.’

This year’s internship was obviously a bit different as everyone was working virtually. Mihail said of the virtual experience ‘It’s quite hard to work with people you have never actually met, to counter this, our team had a lot of informal meetings were we got to know each other, played games and in the end we got quite close and we were able to trust each other with the work we did. Another big challenge is the environment we work in, I was living in Tyler Court and I had my own space which was work friendly.’