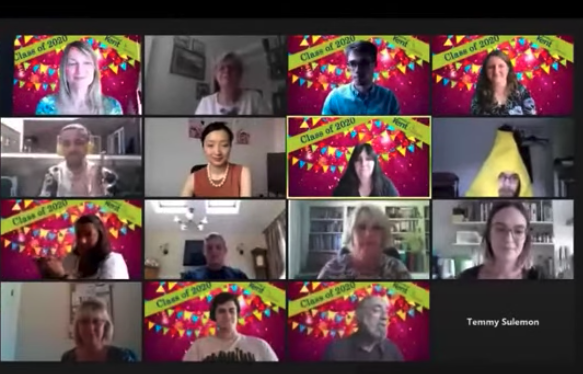 As with most things in 2020, the celebrations for the class of 2020 happened at a safe social distance.

The School of Computing graduates from Canterbury and Medway campuses had their prize giving streamed on YouTube followed by zoom after-party rooms where students and staff could meet to chat, talk about their time at Kent and their future plans.

Head of School Professor Peter Rodgers welcomed the students and congratulated them on their amazing achievements in a difficult year where they quickly rose to the challenge of online learning and exams. For some graduates this has been excellent preparation for the rapidly changing world of employment that they are entering, with many starting their graduate jobs working remotely. Peter also thanked the staff, parents and families who have supported our students through their time at Kent.

Deputy Head of School, Fernando Otero oversaw the prize giving. As well as the academic awards there were some informal prizes too.

The three winners will receive a certificate, free membership to the British Computing Society and a bottle of wine.

The more formal awards were presented to the following students:

A prize awarded for contribution to the school overall

This prize is awarded for the best final year Computing Project. The students who are prize winners are those who achieved the highest marks for their project.

“Sean had a superb all-round performance. He investigated the potential of AI in terms of gait analysis for both healthy and musculoskeletal disorders patients. He works with novel conductive-ink printed smart-insoles and its development process. He achieved far beyond what the project was designed for, demonstrating his ability of being proactive, creative, rigour with strong technical and communication skills.” Caroline Li

A prize awarded for the best placement report was announced by Robert Loveless from Fivium who kindly sponsor this award.

“Callum had a fabulous Year in Industry spent at Motability Operations in London.  In addition to receiving an excellent evaluation for the year from his manager, he wrote an outstanding Placement Report for his Year in Industry submission.  The Report reflected on the business environment, the work he undertook at Motability Operations and his personal development during the year.  It was a Report to be proud of; rich in content, depth and an attractive and well-polished document to read.”

“Tom had an amazing Year in Industry spent at the pharmaceutical company, Pfizer in Sandwich.  In addition to receiving glowing feedback from his immediate team, he was also able to impress his colleagues internationally and in other areas of the business.  He wrote an outstanding Report about his year that was rich in reflections about the business, his work and his personal development.  The Report was engaging to read and professional in all aspects.”

A prize awarded for the best Kent IT Consultancy mark.

“This prize goes to Howard Burroughs. Before he came to university Howard was a pupil at a local school that places Computing in the Classroom students. He took the module in order to be an ambassador for the subject and university at his old school; someone who experienced an ambassador when a pupil now being the ambassador. He also produced an enthusiastic video about his placement that we are using as an introduction to the module for current students.” Janet Carter