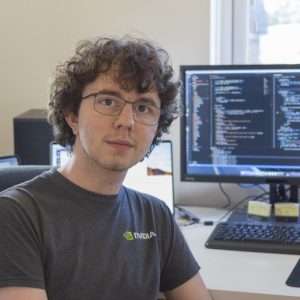 Computer Science PhD Student, Simon Cooksey, has won a Graduate School prize for Postgraduate Researcher with particular recognition for his contribution towards impact. Simon wins £500 which can be used for costs related to his research.

Simon said “This prize means a lot to me, recognition of the impact of my research is very fulfilling. I will use the prize money to continue my research: allowing engineers to use high-performance computer hardware to its maximum capability.”

His supervisor Dr Mark Batty said “Simon has been involved in several high impact projects, both academic and industrial. He has been instrumental in the development of the best technical specifications of the world’s most used programming languages and processors. Simon is an exceptional PhD candidate, utilising his skills to effectively complement the skills of his collaborators and driving novel research with remarkable impact.”

Simon’s research focusses on the study of modern multi-processor computers to understand the behaviours admitted by their complex micro-architectural designs. His research has focussed particularly on so-called weak memory behaviours, which are exhibited on machines that allow out-of-order execution and caching.

Congratulations from everyone in the School.