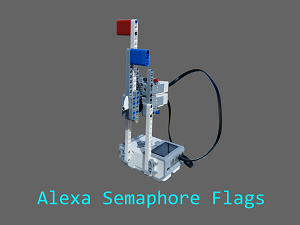 James Pearson, a final year Computer Science with a Year in Industry student, won US $150 in Amazon vouchers as part of a global creative coding challenge. James was one of the first 100 entries in the LEGO MINDSTORMS Voice Challenge: Powered by Alexa competition, sponsored by Amazon.

James identified that approximately 15% of people have some trouble hearing (according to a 2012 study of US adults) and  Alexa’s audible alarms and timers may not work well for them. He decided to make a device that could help people who are hard of hearing or who temporarily cannot hear alarms because they are gaming using a headset or cooking near a loud extractor fan.

James said: ‘People are generally very good at detecting movement, even out the corner of their eyes so I realised that having some flags indicating when Alexa was doing things could be really helpful if you can’t hear it.’

James built a Mindstorms device with two flags on it, the smaller blue flag indicates when Alexa has heard an instruction, and the red flag indicates when alarms, reminders or timers are ringing on the device. James continued: ‘The flag raises at different angles to show different things. You can test it is working by saying “Alexa”, which moves the small blue flag around. The red flag moves to indicate timers, reminders and alarms.’

You can view the code and building instructions James wrote for the project and see the device in the video below.

Although James doesn’t own a LEGO MINDSTORMS kit, he was able to take part in the competition because he was encouraged to enter by Senior Lecturer David Barnes and was able to borrow a School of Computing kit.

The global competition gave Alexa developers, LEGO MINDSTORMS enthusiasts, and creators around the world an opportunity to explore and build the future of voice-based experiences through construction and robotics play.