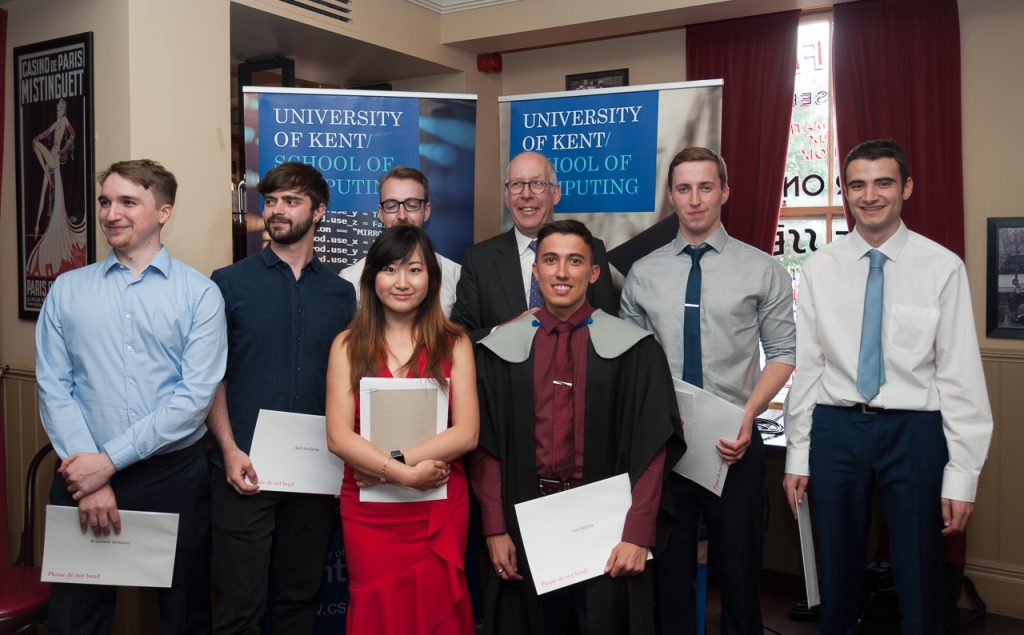 Graduating students and staff celebrated the success of prize winners at a reception for graduating students. The awards for Canterbury-based students were presented by Head of School Professor Richard Jones and Kent alumnus Tyler Amos, from the placement award sponsors Fivium.

This prize is awarded for the best final year Computing Project. The students who are prize winners are those who achieved th e highest marks for their project. This year the standard of work in the projects was exceptionally high with 15 students jointly achieving the highest marks. Those students are:

This annual prize is awarded by the School of Computing in the area of schools liaison and other outreach work.

“James undertook his Computing in the Classroom placement at a school he previously attended as a pupil. His stated aims were to “give something back to the community” and to share his enthusiasm with the next generation, hopefully inspiring them to get involved in the field as they progress with their education. Both goals were achieved with aplomb.”

A prize awarded for outstanding performance on the programme overall

“From Aaron’s Academic Advisor Andy King: ‘Aaron is the model student: he is both smart and engaged. This result has not come easy for Aaron, but Aaron is driven and so I cannot think of a more deserving student for this special prize.’ ”

A prize awarded for the best placement report

“Owen produced a highly polished report that perfectly described and reflected upon his experience as a Tester at Hegarty Maths, a small company based in Harrow. His thorough work description, insightful reflections and overall presentation make for a particularly effective report and an interesting read.”

A prize awarded for the best Kent IT Consultancy mark.

“Jean-Luc has been a fantastic consultant for the KITC. He worked on a range of challenging projects, to which he brought not only his skills but also his enthusiasm and creativity. As a project manager he was clear, calm and encouraging and helped his team achieve great things. This award recognises not only Jean-Luc’s talents, but the effort that he put in to develop and hone these skills over his time in the KITC.”

A prize awarded for contribution to the school overall

“Joanna has been a homework club helper, a peer tutor and a student representative for the school of computing. She has undertaken all tasks with professionalism and a smile, even when circumstances may have been a little trying.”

A prize awarded for the best careers & employability contribution

“Kieran threw himself into university life, as an ambassador for the School and becoming Vice President of Kent RaG and Kilimanjaro Challenge Leader for the Meningitis Research Foundation Trek in Sept 2017.

Kieran did his year in industry at Accenture UK and on his return to university he was keen to spread the word about the advantages of a placement year and taking part in extra-curricular activities. As the School’s Employability Ambassador he has written blogs, profiles and produced videos and has helped promote the many opportunities available to students to improve their skills.”

“The School of Computing Year in Computing Prize is awarded to Cassandra Haughton-James. Cassie graduated with a First in “Comparative Literature and English & American Literature with a Year Abroad and a Year in Computing” which must be a contender for the longest degree title ever awarded. She was the best student of a (particularly strong) group on the YinCo and achieved the highest marks in her cohort.”

A prize awarded for the best poster at the project fair

“Joanna Zhang and Damon Sweeney are the winners of the best poster for their eye-catching and informative poster of their ‘coop control’; an internet of things solution to chicken coop management. Their poster was presented alongside the other final year project posters and was judged to be the best.”

All the pictures from the prizegiving are available at: www.facebook.com/pg/UniKentComp/photos/?tab=album&album_id=2355836921197215