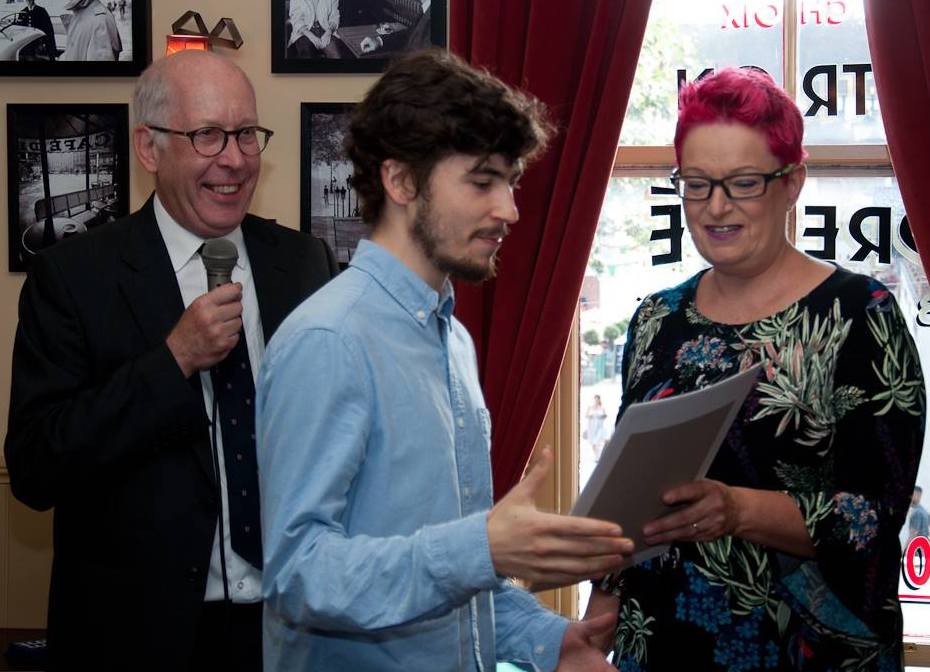 Graduating students and staff celebrated the success of prize winners at a reception for graduating students. The awards for Canterbury-based students were presented by Head of School Professor Richard Jones, Dr Sue Black OBE and Kent alumnus Chris Tasker, from the placement award sponsors Fivium.

The Janet Linington Prize, awarded by the School of Computing in the area of schools liaison and other outreach work went to Oluwadamilola Quadri.

Dami said that she wanted to inspire girls and had thought about the gender imbalance within computing and how she could make a difference; the British Computing Society were particularly interested to find out that our students do demonstrably consider such issues to be important. She had also thought about how to inspire girls who don’t feel comfortable enough to show an interest. Her placement teacher particularly commented upon her treating students with dignity, building relationships rooted on mutual respect.

Alan worked at Kinetic Solutions in Milton Keynes for his year in industry. During his time there he made a great contribution to the company and was able to get involved in a wide variety of business and technical projects; his report was incredibly well presented and highly reflective about the experience and the skills he developed that will help his future career. On completion of his year in industry he was offered a graduate role with Kinetic Solutions and has already started work.

The School of Computing Employability Prize, awarded for the best employability contribution went to Rosie Murrell.

Rosie found time outside of her studies to ensure she has a full and varied CV. From volunteering at applicant days to dancing in an election campaign; she has made the most of her time on campus. As part of her studies Rosie has also chosen to be a consultant in the KITC, taken part in Computing in the Classroom and had a highly successful Year in Industry. She is a great example of using academic and co-curricular activities to improve her career prospects.

The School of Computing Contribution Prize, awarded for overall contribution to the School was presented to Kozhin Fatah.

Kozhin has been a course rep and a school rep during his time with us, addressing issues with sensitivity during meetings. He has also been a dedicated and reliable homework club helper and peer tutor. He has always volunteered when we have needed students to talk to outside bodies.

School of Computing Year in Computing Prize, a prize awarded to the best year in computing student, was won by Pei Ying VanessaVoong

Vanessa came to the Year in Computing from the Business School, where she was on the verge of completing a degree in Business Studies. Despite having spent her placement year at IBM (in an HR role), she had no formal experience of creating software. But she did prove to have a real talent for it, outperforming all but the very best Computer Science undergraduate students on shared courses, and finishing with an average mark for the year in the 90s.

The School of Computing KITC Prizes were awarded for the best Kent IT Consultancy mark. The winners were Rosie Murrell, Alan Gore and John Gabriel.

Congratulations to all the prize winners.

Photographs from the graduation reception and prize giving are available at www.facebook.com/UniKentComp