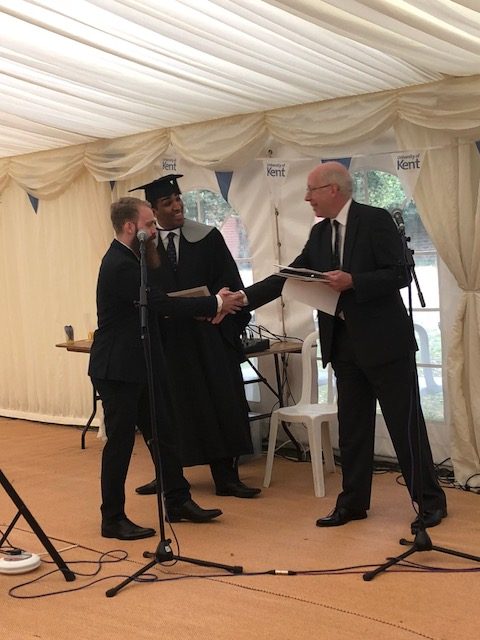 Students from the School of Computing were awarded prizes for outstanding achievements at their graduation ceremony at Rochester Cathedral on Tuesday 10 July.

The Computer Science Project Prize, a prize awarded for the best final year Computing Project, was won by Nikhil Patnaik and Brent Gammon, and George Langroudi

Brent and Nikhil worked on an ambitious project focussed on developing a data analysis application using wearable technology. The whole team worked hard to ensure that the project was a success. Brent demonstrated a high degree of independence and competence on the application development while Nikhil contributed significantly to the data analysis tasks using the R language.

George completed an outstanding project to develop an intrusion detection and network testing tool for system and network administrators. The hard work and professionalism of the entire project team stood out, but George went the extra mile to make the project a great success.

Brent spent his Year in Industry working in central London at Motability Operations.  He took on every challenge that was presented to him and took himself out of his comfort zone to expand his skills in both technology and the wider team environment.  He became a valued member of the team and has been rewarded with a well-earned graduate role.

The School of Computing KITC Prize, a prize awarded for the best KITC mark, was jointly awarded to Anamika Yadav and Luke Thompson.

Anamika brought a calm, focussed energy to the projects she worked on. She demonstrated her ability as a leader, supporting those around her to do their best work.

Through sustained effort, Luke made great strides in his development as an IT Consultant. He was a popular member of the team, and was able to bring a sense of cohesion to projects that he worked on.

The School of Computing Contribution Prize, awarded for overall contribution to the school, was won by Anamika Yadav

Anamika is a long-term Ambassador for the School at Medway.  She has always been very helpful in talking to applicants at Applicant days, being friendly and welcoming, and giving excellent talks about the school from her own experiences. More recently she volunteered to do a student profile video which is on YouTube and on the School of Computing website. She has consistently been a very positive and constructive presence around the school and has been a pleasure to have around.

The Best Year in Industry Report from a Medway Student was won by Azeez Adeogun.

Azeez worked at ARM in Cambridge for his Year in Industry. His role required him to work alongside a wide range of teams and to develop lots of new skills. His report was exceptional and he reflected incredibly well on the experience and what he learned.

Congratulations to you all.

Photos from the prize giving are available on the School of Computing Facebook page at: https://www.facebook.com/UniKentComp/