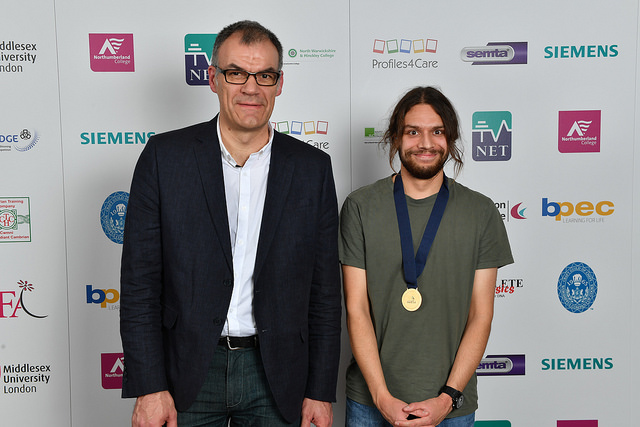 Neelan Thuraisingham, a second year student at the School of Computing has won a gold medal at the WorldSkills UK competition.

Neelan, who studies Computer Science (Networks) with a Year in Industry, was selected for the Network Infrastructure Technician national final after winning a national qualifier in Surrey.

Neelan said; ‘When they were announcing the prizes I was hoping for bronze and then silver and then when those prizes went to other people I thought I’d missed out. So it was a huge shock when they announced my name as the gold medal winner. I’m really pleased and would like to pass on my thanks to everyone who supported me.’

WorldSkills UK Competitions bring together apprentices and young people from across the country to compete to be the best in their chosen skill. The national finals were held at The Skills Show, the nation’s largest skills, apprenticeships and careers event, which took  place at the NEC Birmingham.

The Network Infrastructure Technician competition focused on all the essential requirements for a successful career as a Network Technician. It consisted of a series of tasks that included the installation, configuration, maintenance and troubleshooting of ICT networks using predominantly CISCO devices. The competition tested the knowledge and skills learned in the Cisco CCNA Network Academy Program.