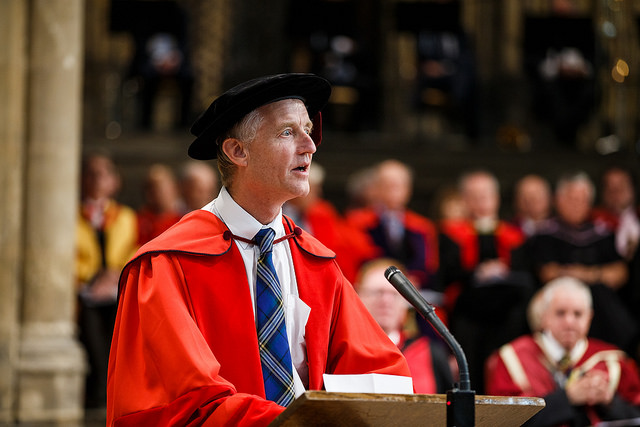 Computer scientist Professor Simon Peyton Jones has received an honorary doctorate from the University of Kent.

He was awarded the degree after an oration by Professor Simon Thompson who cited Professor Peyton Jones’ achievements, not only as a top-rank researcher, but also as the initator of the Computing At School (CAS) organisation. Prompted by his children’s experience of ICT at school: in his words “taking the most interesting subject and making it the least” CAS has brought change in the national curriculum, making Computer Science – rather than IT –  a GCSE and A-level subject.

Most Honourable Chancellor, Graduates and Graduands, Ladies and Gentlemen.

If we want to see what the mediaeval masons achieved, and how that has endured, we only have to look at the cathedral where we are lucky enough to hold our graduations, or at similar places around the town, the country, or the world. The same for contemporary architects and engineers; the artefacts that they build are tangible: we can see them, we can touch them, we can inhabit them. Software is different: some of the most complex systems ever built – the international phone network – Google search – the software in a modern jet or car – are completely invisible, but are at the same time essential to life as we know it.

Our honorary graduand – Professor Simon Peyton Jones – is one of the most distinguished Computer Scientists of his generation. Just as the medieval masons needed chisels and other tools to do their work, so it is with software. Simon’s contribution has been to design and build programming languages that we as programmers use to write our software. As well as this, he has introduced a whole new generation to programming, through his work to get computer science taught in schools in the UK.

Simon’s early years were in South Africa – perhaps no coincidence, he was born near Simonstown – and in Trinidad and Tobago, where his father was in charge of the coastguard service.  Returning to the UK he boarded at Marlborough, where he first got a chance to use a computer: at the time, the school had precisely one. Even at this stage, he knew that computing would not just be a hobby but “the ultimate destination” for him. Cambridge gave him the background – perhaps the perfect background – of two years in maths, a year in electrical sciences and then the postgraduate diploma in computer science. At his 21st birthday party he was recruited by the owner of a small manufacturing company, where Simon was to be chief software person, programming Z80s for process control and monitoring.

With a couple of years’ experience under his belt, it was time for a change. A happy accident alerted him to a lectureship at University College London, which he was pleased – and surprised – to get.

As a lecturer, he was obliged to do research: after finding out that sitting in his office staring at a blank piece of paper was not the way to do it, he started to work in functional programming, which he had first heard about in Cambridge. FP is a bit like writing programs using maths: you write a descriptions of what needs to be done, without being too specific about the details of how it is to be done. Dropping some traditional things from the programmers’ toolkit, and keeping things so to say “pure”, makes the language more effective: “less is more” in this case.

This “functional” approach to programming was a real focus of research in the UK the 1980s, and Simon was mentored and supported by David Turner, who was a leading functional programmer at Kent at the time, and who is at the ceremony today. Through moves from UCL to Glasgow University, where he spent ten years, and Microsoft Research in Cambridge, where he has spent the last eighteen, Simon has continued to work on functional programming. He was a key member of the committee that defined the Haskell programming language some 28 years ago, and of that original group, he has been the the one that has stuck with this project until now. He has called himself, in a self-deprecating way, “a one trick pony” but if that’s the case it’s a pretty influential and substantial one.

At Glasgow, Simon developed the Glasgow Haskell Compiler, and GHC has become synonymous with Haskell itself. The compiler translates Haskell programs into the machine code that the computer can understand, but it also, in the case of GHC a platform for research in the area. Simon is a prodigious research collaborator, and it is in no small part due to him that research in programming languages and compilers is something in which the UK has an international lead.

Looking at Simon’s career, It is hard not to draw an analogy with the current political scene. A principle he adopted in the early 1980s – of building a pure programming language – has guided his work. Many programming languages have come and gone since then, but Haskell has been a slow grower: taught in universities, used in a few companies. But in the last five years it has seen an explosion in popularity, particularly with a whole new generation of young people who were not even born when the language was first defined. The only thing missing is an invitation to the Glastonbury main stage: perhaps if he were to grow a beard …

However, as I said at the start, Simon is more than a top-rank researcher …

Prompted by his children’s experience of ICT at school: in his words “taking the most interesting subject and making it the least” Simon initiated the “Computing At School” (CAS) organisation in 2008, calling together a group of like-minded individuals with the goal of improving computer science education in UK schools. CAS has been astonishingly successful. It has brought change in the national curriculum, making Computer Science – rather than IT –  a GCSE and A-level subject. To support this change, it has set up a subject association for thousands of teachers across the country. Computing education in the UK, and CAS, are now a beacon to others wanting to effect change in their own countries.

Simon is not only the founder of CAS and chairman of the board, he is also widely seen as the most energetic and enthusiastic advocate of school level computer science education in the UK. He remains the figurehead and most influential individual in this movement, working successfully in two different directions: towards policy makers, such as the DfE, and towards school teachers who deliver the new curriculum in the classroom. For both audiences, Simon has managed to create enthusiasm, engagement and commitment for the subject that is rare in our discipline. There is no doubt that Simon’s work through CAS has had a major impact on the education of hundreds of thousands of pupils, in the UK and internationally.

Kent is not alone in wanting to recognise Simon’s contribution – he became one of the handful of Fellows of the Royal Society in computing this year based on his research achievements, and he is also a Distinguished Fellow of the British Computer Society too, acknowledging his contribution to the discipline in general. Most Honourable Chancellor, to you and to the whole University I present Simon Peyton Jones to be admitted to the degree of DOCTOR OF SCIENCE, honoris causa.