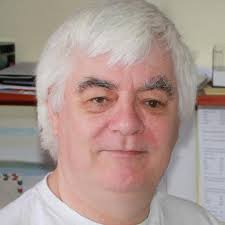 Bob came to Kent in 1970 to read Electronics (there was no computing degree in 1970) and in his second term was taught BASIC by Peter Brown and ‘never looked back’, teaching himself enough skills to hack the University system (with some accomplices) a few terms later. On graduation, although being offered jobs at leading technology companies, Bob opted for a Master’s at Essex before being invited back to Kent as a postgrad student whilst also starting to do ‘a bit of teaching’.

‘It was at this point that I did my most far reaching (but not difficult) hack. I got into Brian Spratt’s account on the student records system by guessing his password at the first attempt (it was his wife’s name). I used that to get the address of a girl I really liked, so I could send her a Christmas card. She is now my current wife!’

Bob was part time system programmer before being appointed lecturer in 1978. He combined teaching responsibilities with managing the operating system for the University’s mainframes. For ten years Bob was Master of Darwin College, ‘It was a varied job in itself; not just entertaining and ceremonial, but a lot of committee work, not to mention disciplinary hearings and dealing with more serious matters. The teaching provided a good counterbalance to the occasional doom and gloom.’ Bob then moved back to Computing where he has been an admissions officer for the past 13 years.

‘I’ve worked with some great people over the years. It’s quite weird that I’ve taught so many existing and past staff, mainly but not exclusively in computing. I can’t remember them all, but the earliest one (although I don’t remember him) must be Ian Utting. There’s also Gerald Tripp, Mark Wheadon, Tim Bishop, Fred Barnes, Olaf Chitil, Daniel Knox, and even Richard Jones.  I believe there are one or two in IS, and at least one in EDA.

‘Why did I become an academic? I wanted to play, find stuff out, and experiment. I couldn’t see me getting my own computer to play with (how wrong I was!) but there was just so much I wanted to do, and mostly I did it. It didn’t happen quite as I planned, and I never became a formal researcher; Peter Brown did introduce me as a “non-specialist specialist”, which is probably a kind way of saying “Jack of all trades, master of none”. He did say I learned fast, though. This came in useful when I did consultancy work (sometimes quite lucrative) for people such as Pfizer, Dun and Bradstreet, and so on. And of course, things have moved on, and I have my own computers (at last count, we had about 35 at home, excluding tablets, Raspberry Pis and Arduinos, etc.).

‘I don’t suppose I ever expected to be here this long! Things have obviously changed a great deal. The number of students has increased by an order of magnitude, and the number of buildings about the same. The eight teletypes that we started with (under the stairs in the foyer, mostly) have now become many, many PCs round campus, not to mention all the other network clients.

‘I want to make it quite clear that I am not retiring.  I am going to be working for at least one higher education institution, I expect to be working for a small local start-up company and I am going to be representing the BCS in schools, inspiring pupils to consider computing careers. I will also still be involved with the BCS Kent Branch, and with the Kent BCS Student Chapter. I am also involved with the BCS Computer Conservation Society. And I’ll once again have time to play with stuff – such time has been in short supply the last few years. I would like to thank all my colleagues (in other Schools too) for being so great, and for being so supportive.’