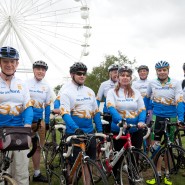 An app developed by students at the School of Computing will be used to track the progress of cyclists from the University of Kent as they make their way from Paris to Canterbury. David Chadwick, Simon Thompson, Richard Jones and Omid Hajilou, along with other university colleagues, set off from Paris on Tuesday 1 September as part of the 50th Anniversary Goldstein Cycle Rides.

David said: ‘We will start on Tuesday afternoon with a 30-40 mile trip around Paris and its environs, before setting out on our return journey on Wednesday morning. We expect to arrive on campus around 2pm Saturday.’

The mobile phone app and accompanying web site written by MSc students will track the cyclists’  heart rates, speeds and cadence. And, as David notes: ‘You will also be able to see if anyone gets lost, or left behind!’