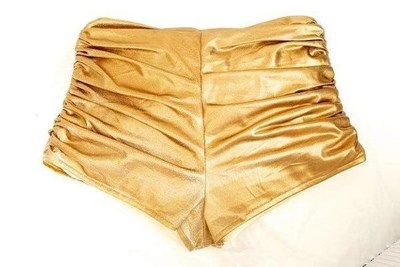 The School of Computing’s staff and students have a history of taking on challenges for charity with previous efforts including marathons, triathlons and treks. However none have involved a pair of Kylie-esque golden running pants, until now. Senior Lecturer, Eerke Boiten, explains:

‘Straight to the point: if my supporters help me reach my fundraising target for WaterAid, I will run the 2015 Bristol Half Marathon in golden running pants.

‘Through a combination of circumstances, involving a curious and a creative family member, I ended up owning a pair of golden running pants. Nice to keep in the cupboard as a curiosity maybe, or pass on to the next Kylie, but also an opportunity to do something special.

‘I’ve run this particular half marathon before in each of the last five years, raising money for WaterAid the first two times. Spectators will not need to worry that my race is over before it’s properly started; even my personal best of just below 1:50 probably isn’t going to improve. But I’ll have fun doing it, and with a bit of luck the pictures will this time show more than wild hair and comfortable exhaustion.’