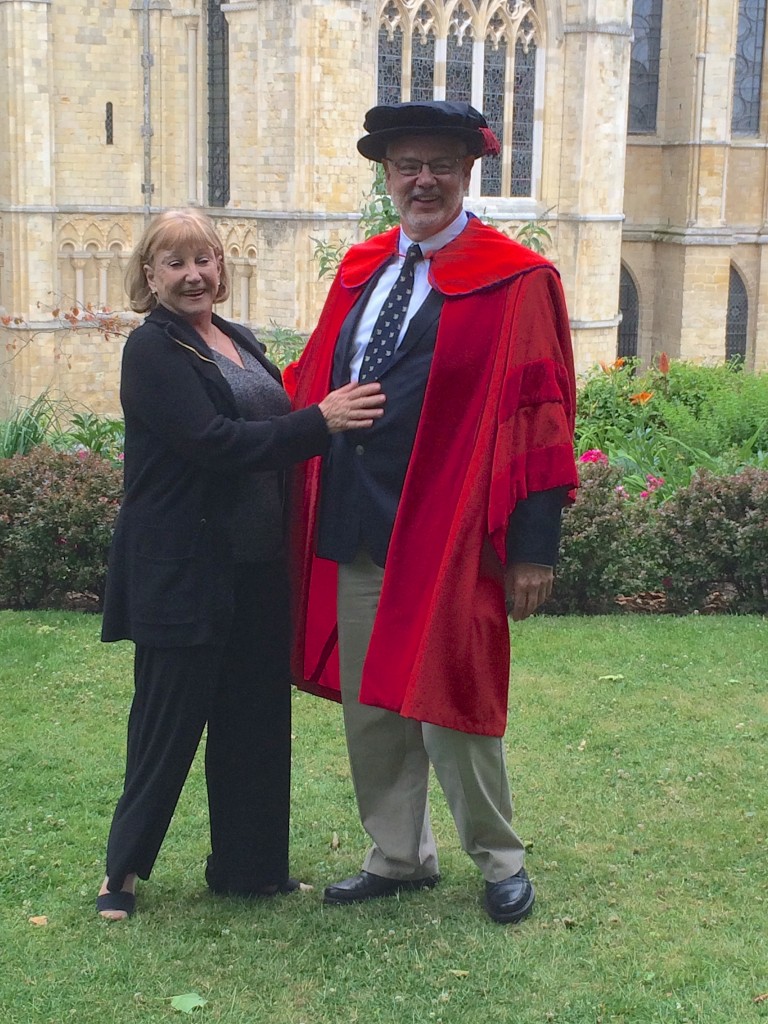 On Monday 13 July at the degree congregation in Canterbury Cathedral, the Chancellor conferred an honorary doctorate on a former student of the School of Computing, Dr Anthony Robert West for championing student placements.

Tony, as he is more commonly known to his friends in the School, has a long career in research and industry with roles in IBM, Xerox, Sun Microsystems and Cisco. He implemented the Cisco International Intern Programme, which has benefitted many Kent students, and is now CEO of ectalent which places students and graduates in high-tech companies.

“It’s extraordinary how history seems to run at different speeds. This cathedral has served its purpose for hundreds of years, almost unchanged. A car from the nineteen seventies might look a bit peculiar, but we’d recognise it, and be able to drive it, without any trouble at all. It could not be more different in computing.

“When our honorary graduand, Tony West, arrived at Kent in 1971 he was going to study electronics, but on finding out that the university had a – that’s right one – computer, he changed to the new degree course in Computers and Cybernetics. Programming on this one computer required tenacity and a clear head: one of Tony’s first programs – to play noughts and crosses – was written in the ground-breaking Algol language – and took up 2,000 punched cards. Woe betide you if there was any error anywhere, or you dropped the pile of cards.

“The student experience on Computers and Cybernetics in the early 1970s was a bit different too … the eight students in Tony’s year turned lectures into conversations with the lecturers about how to get the degree right. There was time for music too: Tony played harpsichord in a baroque chamber orchestra, as well getting involved with Eliot College life.

“In the forty or so years since then, there have been huge advances in computing that we now take for granted, and Tony has played an active part in making many of them happen. On graduating in 1974 he went to work on a PhD at Queen Mary College in London, where he was – in his words – able to “chase a lot of rabbits” following his interests where they took him. He and his supervisor worked on early ideas for computer workstations – precursors of the PC, which didn’t appear for another ten years – and networking: joining computers together to get radical new things like email. He became “the Ethernet guy” in the UK – the first of many occasions where Tony has picked the right technology and become an evangelist for it.

“After visiting Zurich for a conference in 1978 he was poached by IBM labs there, to work on simplifying computing operation environments, building something that looked very much like an ancestor of Unix and linux. This led him – via the award of his PhD in 1980, and marriage to Frances who also worked at IBM – to Florida, and then a move to the west coast to work at Xerox’s Palo Alto Research Centre or PARC.

“PARC has an extraordinary place in computer science mythology – a bit like Willy Wonka’s chocolate factory, but for technology – PARC staff invented radical new ways of programming – Smalltalk, the first (proper) object-oriented language was designed there- and new computers: Apple poached the team from there that built at first Macs, and designed the user interface that we’re still using today. The trouble was, Xerox were terrible at tech transfer, and Tony and found out that pure research wasn’t for him.

“He was headhunted from PARC by this tiny startup from Stanford, named Sun Microsystems, to run their engineering team, and that was where he worked for the next twenty three years, in roles ranging from engineering to marketing and evangelising for open source systems: SunOS unix, Java, and the RISC open source chip design. During those years, Sun grew from a handful of employees, to over 40,000 staff: and the legacy of Tony’s work there is still seen in Oracle products – like their high-end servers – today.

“I’ve talked about Tony’s technical achievements, but for many of us here his most important and lasting contribution is setting up placements programmes – a year’s work in industry as part of a computing degree – in companies in the USA. There’s a strong tradition in the USA of alumni giving back to their universities, and many companies are right behind this too. The Sun Start programme at Sun Microsystems was masterminded by Tony, and supported from the very top by Scott McNealy, the chief exec.

“Sun Start got going in 2000, and over the following years took hundreds of students from Kent and other universities to work for a year in the USA. This had never been done before – summer internships, yes, but not complete years – and Tony was passionate about how the one year model could transform the experience for everyone involved. A year in employment means becoming a full employee – making a full contribution – rather than gaining an experience of work, so that students get genuine employment, and employers get a productive employee for a year.

“As a department, too, we’ve benefitted from students gaining practical experience which we simply couldn’t reproduce in the lecture room: placements students have contributed to Cisco’s Open Stack implementation, have led sales teams at IBM and provided front-line support on the trading floor for HSBC, to give three examples.

“After his time at Sun, Tony moved on – via a couple of startups – to Cisco, the networking market leader and repeated the process. As before, scores of Kent students have benefitted from the technical and cultural opportunities that a year in California could bring, and a number have gone on to work for Cisco and others in the Bay Area. His latest step has been to go it alone, and his company ectalent are building up a portfolio of placements with companies like IBM, SAP and HP.

“The University of Kent values all the contact it has with current and future alumni, and it is particularly gratifying in this fiftieth anniversary year for the University to celebrate the achievement of an alumnus. For his services to the computing industry and profession, through both his technical evangelism and his commitment to enhancing computer science education, Most Honourable Deputy Vice-Chancellor, to you and to the whole university I present Dr Anthony Robert West to be admitted to the degree of DOCTOR OF SCIENCE, honoris causa.”