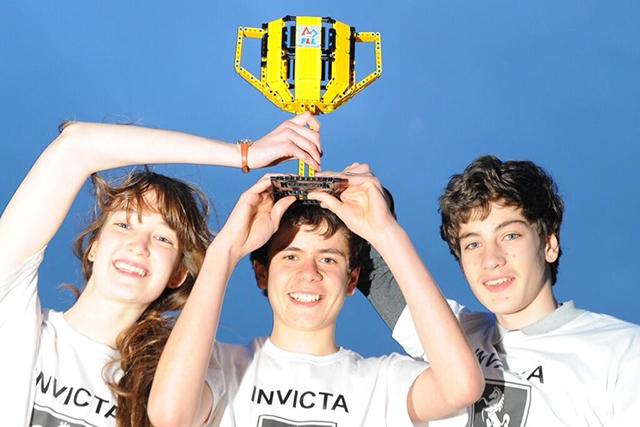 Three teenagers from Kent have been named the winners of the IET’s global First Lego League technology competition. They beat 20,000 teams from 70 countries to claim the title.

Emma English, 14, a pupil at Simon Langton Girls’ Grammar School, her brother Oli and friend Carlos Purchase-Galarza, both 14 and Langton Boys pupils, were champions at the regional finals held at the University of Kent campus in December 2013. They progressed to the national finals at Loughborough University before competing in the global final in St Louis, USA in April.

The competition aims to get young people, aged nine to 16, thinking about the application of technology in real life situations and involves individually designed robots, made using the LEGO® MINDSTORMS equipment. This year’s competition entitled ‘Nature’s Fury’ challenged teams to find a solution to tackle the effects of natural disasters.

Team Invicta designed a wristband to track down earthquake victims trapped in rubble. The team’s idea involved an indestructible box being placed on the top floor of buildings so that if it collapsed, the box would fall and ‘sense’ the earthquake. It would then send a radio wave out to the wristbands being worn by people in the area.

On receiving that transmission, the wristbands would switch on to full power and send a wave back to the box covering their area, giving it all the information for that user and helping pinpoint where people are.

First Lego League regional finals for Kent and Medway are hosted by the University’s Partnership Development Office alongside the School of Computing. Over 250 pupils from schools across Kent took part in the First Lego League regional finals at the University’s Canterbury campus on Tuesday 3 and Wednesday 4 December 2013. The event was covered by ITV Merdian news (video here).