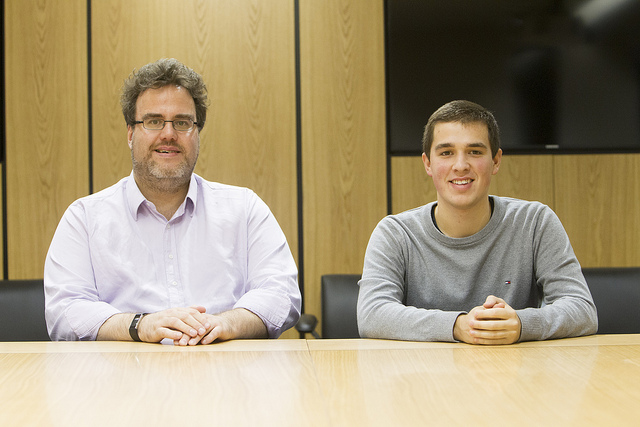 Teams of academics and students put on a public display of their knowledge at a recording of The 3rd Degree, BBC Radio 4’s lively university-based quiz show. The academic team included the School of Computing’s Colin Johnson and final year student Steve Farrugia represented Computing on the student team.

Comedian, Steve Punt, known for ‘The Now Show’ and ‘Horrible Histories’, hosted the recording in Darwin College, on 11th November.

Steve Farrugia said: “It was a really good experience. The students had an advantage over the academics on some of the popular culture knowledge, like the Breaking Bad questions, but I never knew that Colin was such an expert on classical music!”

Colin added: “It will be interesting to hear how they edit the recording down to fit in the broadcast time as we were sometimes asked to repeat or rephrase things. We can’t say who won, but it is fair to say that both the staff and student teams did Kent proud and it was a close-run quiz.”

The 3rd Degree travels to universities around the country, and Kent was one of six venues chosen for the current series. The episode is scheduled to air on Radio 4 in April 2014.