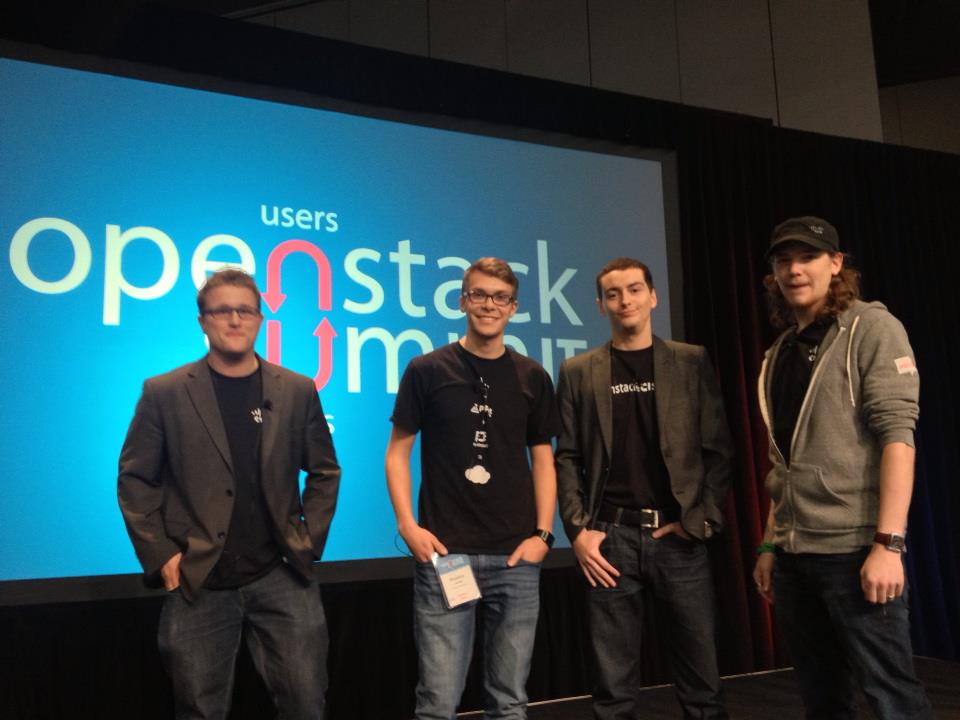 Four School of Computing students have presented their work to a conference in Portland, Oregon. The undergraduates, Sam Betts, John Davidge, Jack Fletcher and Bradley Jones, have been spending their Year in Industry working for Cisco Systems in San Jose, California working on a project called OpenStack. They were selected to present their work to technology industry leaders at the OpenStack Developers Summit in April.

OpenStack is an open-source cloud computing platform, aiming to become the industry standard for virtual computer, networking, and storage services in both private and public clouds. It is being developed by a large community number of companies and individuals from all over the world, including Cisco.

The placement students have built applications that run on top of or alongside OpenStack to extend its capabilities and improve its user experience. This work has culminated in two projects – Curvature and Donabe. Curvature is a graphical user interface for OpenStack that aims to simplify the often-confusing world of virtual networking with easy to understand visualizations, while Donabe is a framework for saving and reusing virtual applications to build complex virtual systems.

Jack said: “The call for presentation submissions went out in February, and we were keen to propose a session on the work we’d been doing, as virtual network visualization is something that the OpenStack community has been talking about for some time. It seems that people liked the sound of our work, as a month later when the votes were counted our presentation had been accepted.

“Our presentation was on the final day of the summit. We had spent the week demonstrating our work at the Cisco booth and had generated some buzz around it, but you can never be sure how that will translate into actual people interested in coming to hear you speak. Five minutes before our time slot started there were maybe 30 people in the room, but they just kept coming. By the time we started the 100+ capacity seating was full and people were still filtering in. To see so many big names in the OpenStack community there really filled us with confidence.

“The presentation itself couldn’t have gone better. The live demo went off without a hitch, and the audience was brimming with questions – the main one being when can we have this?!

“The opportunity to take the work we’d been concentrating so hard on for the past six months and show it to an audience of people from all over the industry was fantastic, and the feedback we got has really given us a lot of confidence in the value of our contributions to the community. We’re currently working hard to push these projects out under open-source licences so that people everywhere can take our code and run with it. We look forward to seeing it used in different situations, and what ideas people come up with to make it better.”