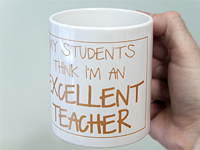 Students are saying a big “Thank you” for excellent teaching skills and the positive impact it has had on students’ lives.  The success of last year’s awards has been built on by including three new awards: Professional Services Award, Postgraduates who teach and Teaching Employability along with Best Teacher, Fantastic Feedback and Best Supervision.

These academics and University staff, who are committed to delivering excellent teaching and/or support for their students, are being recognised and rewarded with a mug and letter as a gift from Kent Union.

Students have had from the beginning of November 2011 to the end of the spring term to nominate University staff members and over1400 nominations were received this year, including nominations for staff from Medway and Brussels, increasing last year’s total immensely which was just under 500.

All the nominees will be on Thank You posters around campus.