Monday 9 October, saw BAFTA and MOBO Award-winning UK hip-hop artist, writer, social entrepreneur and historian Akala delivering a lecture at the Canterbury campus as part of the University’s Student Success Inspirational Speakers Programme. This aimed at developing a conversation around race and belonging in the academy, and as part of the Black History Month events here at Kent. The lecture critiqued epistemology and was entitled: ‘A history of Black Britain.’
Akala’s lecture critiqued epistemology and highlighted the contribution of black people to the British society, scholarship and economy. With references of black people’s predecessors from the African sub-continent, Akala took us on a historical journey which dated back to the pre-colonial era. Akala explored the influence of race, class and political structures in promoting social inequality and maintaining control over minority groups. Uniquely, Akala explored racialised identity and highlighted how this poses barriers to access and progression.
Dr Wayne Campbell, Director of Student Services, opened the proceedings to over 400 students, staff and external delegates. 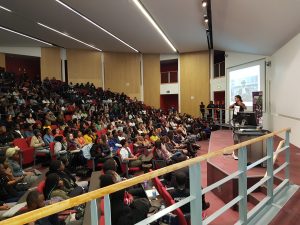 The lecture was preceded by a fantastic spoken word and vocal performance by Kwame, President of the Medway Afro-Caribbean Society, and Esere KJ a stage 2 Psychology student. This was followed by a musical performance by Carris-April Addy, a third year student from the School of Mathematics, Statistics and Actuarial Science.
Jacob Bondzai, former president of the Afro-Caribbean Society introduced the keynote speaker Akala to a resounding applause by the delegates.
Following a most inspirational, edifying, informative lecture, Akala was presented with a token of appreciation on behalf of the university by Amanda Nsubuga, a 3rd Year Student Artist from the School of Music and Fine Art. This was in the form of an artistic recreation of Akala’s image.
Aaron Thompson, Vice President (Activities) of the Kent Union closed the evening’s proceedings.
The evening’s activities was concluded with a non-traditional meet and greet session, where Akala provided delegates with the opportunity to take a ‘selfie’ with him. 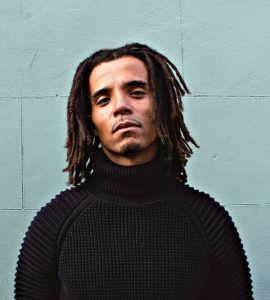