The University has been shortlisted in the Outstanding Support for Students category of the 2017 Times Higher Education (THE) Awards.

This award will be given to the UK institution that helps students to gain the maximum benefit from their study.

Kent’s shortlisting was based on its Student Success Project, which was set up to address the sector-wide issue of lower rates of attainment and progression amongst students from low socioeconomic groups, those with disabilities and students from black and minority ethnic (BME) groups.

Launched in 2015, the impact of the Student Success Project has gained national recognition. In awarding a gold rating to Kent in the Teaching Excellence Framework (TEF), the panel described it as ‘outstanding’.

The project combines a programme of qualitative research with the development of innovative student support interventions. Co-ordinated by a central team, this combination is pivotal to the success of the project with student demand and the nature of the academic School informing the types of intervention offered.

The project findings suggest that investing in the provision of a varied range of support activities, guided by the voice of students themselves, not only allows for flexible and adaptable interventions, but moves away from the ‘one size fits all’ approach.

Initially launched in nine pilot Schools, the Student Success Project led to the development of a Virtual Student Advisor app and a series of events to promote student equality among Kent’s own staff and students as well as those outside the University.

Recent events include a staff symposium, a student conference and a national conference for researchers, policy-makers and practitioners. The inspirational speakers programme was established to stimulate discussions on race and belonging in an academic context.

The winner of the THE Award will be announced on 30 November. 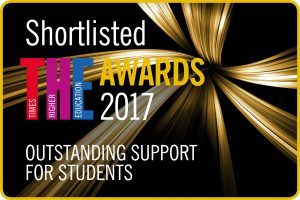