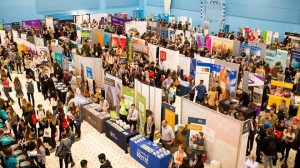 We are coming to the end of a very busy period for the University’s Recruitment team. I have been to UCAS events in Newcastle, Middlesbrough, London, and Lincoln. The large HE Fairs are my favourite part of the job so, although it was very tiring, the London UCAS Convention at the Excel Centre was very enjoyable as well as, hopefully, being helpful for the visitors.

It has been a busy period for visits to schools too. I spoke to the Sixth Form at St Gregory’s, Tunbridge Wells about Student Finance and did a General Guide to Higher Education for the large Lower Sixth at Eltham College near Greenwich, to name a few. On both these occasions several students remained behind after the talk to ask questions. It’s great to see sixth-formers taking the decision they are about to make so seriously, but also getting excited about going to university.

As a Kent alumnus it is great to welcome visitors to the campuses and I had my first school visit of the year when 17 pupils from Newman Catholic School in West London came to look around the Canterbury campus and I spoke to them about student life. We always talk about how nice a place Kent is, so it’s fantastic when students get to see the University in person, rather than just taking our word for it.

I was also lucky enough to attend a four-day HE tour of Cyprus with the British Council. We went to Limassol, Paphos and Nicosia talking to Cypriot students about what a UK university is like, how to apply and what they should be looking out for. It seems the UK is a very popular destination for Cypriot students – at Kent we have almost 100 students from Cyprus. I visited a few schools while I was in Cyprus and was particularly interested in Studio 8, an art college in Limassol, whose School Director is a Kent alumna!

We head into a slightly quieter period now, so it will be nice to have a holiday, but I will be busy again come June with lots of school visits, an Open Day at the Medway campus on 18 June and two more UCAS conventions in Bedfordshire and Birmingham.