A real life owl display on behalf of Canterbury Nightline returns to campus!

Owls are symbolic to the Nightline volunteers who stay up throughout the night to listen to any problems you may have.

Where: Senate Building, Canterbury campus (opposite main entrance to the Templeman Library).

This event is free to attend.

Our popular one-month membership offer is back, but with a twist – ALL Gold Kent Sport memberships are half price!

From 1 April to 30 April 2019 inclusive, you and your friends and family can enjoy a wide range of activities for half the usual price of Gold public membership at Kent Sport.

Staff can get membership for just £13 – that’s just 80p per day. Juniors (anyone in full-time education or 16-18 years old) pay just £29. And those outside of the University get an all-access Gold membership for £37.

The spring membership offer provides unlimited access to modern sports facilities including the fitness suite, squash courts, all outdoor facilities and entry to all fitness and dance classes. If you’re looking to explore the campus, and maybe further, then Gold members can also hire a range of high-quality bikes for free through the Kent Sport Cycle Hub.

To purchase your membership, visit the Sports Centre or Pavilion receptions from Monday 1 April. Membership is available to purchase and use until the 30 April 2019 only. For further details and terms and conditions, please visit kent.ac.uk/sports/membership. You can view the Kent Sport facility opening hours here.

*To apply for the junior rate please bring with you proof of full-time education (student card, etc.)

The School of Arts launched its MA Theatre Festival last night, comprising two weeks of performances from students on our MA programmes in the Department of Drama and Theatre.

The festival kicked off with On Our Way by Scorched Ensemble, a group undertaking the MA in Physical Acting programme, which explored the life changing journey of becoming a refugee. A gallery of images from the performance is available here.

On Monday 25 March, there will be a rehearsed reading of an original play, Sexcapades, written by MA Theatre Making student Matthew Hessey. The play story about love and sex, and all the joy, despair, affirmation, rejection and hilarity each provides. To book, please see the Eventbrite page.

On Wednesday 27 March, MA in Theatre Making student group Scapegoat Theatre will be presenting Unload in the Forrest Studio. To book, please see the Eventbrite page.

On Thursday 28 March, there be a solo theatre performance, Reflection, by a MA Theatre Making student to convey the world of self-conflict using the mirror, projection and dance movements. The performance will be held in Jarman Studio 2. To book, please see the Eventbrite page.

On Friday 29 March, MA in Theatre Making group Scene 99 will present Unrest in Jarman Studio 1. The performance provides an opportunity to be a fly on the wall in a room of pure unrest, the bedroom. To book, please see the Eventbrite page.

Finally, the festival concludes on Monday 1 April with an adaptation of Charlotte Perkins Gilman’s short story The Yellow Wallpaper by students on the MA in Theatre Making, held in the Aphra Theatre. Please note this is a schedule change to the previously advertised performance on 21 March. To book, please see the Eventbrite page here: https://bit.ly/2TKvP4y

All events are free to attend. There is an age restriction of 18 and over for Sexcapades and Unload.

Alumnus Antonio Mascoli, who graduated with an MA in Film with Practice in 2018, has had his film NAMRON selected to be included in the Flicks International Student Short Film Festival 2019, to be held  from 28 -29 March in Groningen, the Netherlands.

Flicks is a film festival originating from the Cultural Student Centre USVA in Groningen, which gives national and international student filmmakers the opportunity to participate by showcasing short films of up to 20 minutes in length.

NAMRON tells the story of 21-year-old Norman who is travelling to his parents’ house to tell them he’s in a same-sex relationship. But first he needs to accept the man he sees in the mirror. Sharing the journey with his boyfriend, Norman encounters different people and places, which evoke childhood memories and bring a lifelong inner turmoil back to the surface.

Speaking of the film, Antonio said: ‘NAMRON was produced as my final dissertation for the MA Film with Practice. The Master’s gave me the necessary technical and artistic confidence to make a movie about a complicated theme, about which we often think we know everything. Though, if there is still strong discrimination and prejudice nowadays, perhaps we know nothing after all.’

The gas leak at the Canterbury campus that caused the evacuation of the Eliot, Rutherford, Library and Senate buildings this lunchtime has now been fixed.

Building alarms are being re-set and people will be allowed to return as soon as that is completed. It is anticipated this will take half an hour.

The leak was caused by a contractor cutting through a pipe.

Staff from across the University help ensure that Congregations are an unforgettable experience – and Kent’s winter ceremonies were no exception. 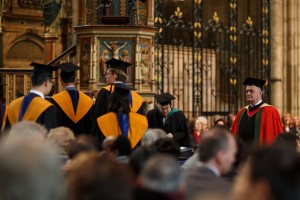 Congregations are the culmination of a student’s time at university. It is the most important day of their life so far and a testament to all their hard work over a three- or four-year period. That’s why it is so important that the occasion is a success for everyone involved.

Overseeing the smooth-running of all the Congregations – a job that starts many months in advance of the actual ceremonies – is Corporate Events Manager Lorna Parrett. She explains that the Corporate Events team in turn relies on a huge number of University staff volunteer helpers.

‘Without staff giving up their time and helping us the congregations would not happen,’ she said. ‘The students are always so overwhelmed to see staff that they have come to know over the years and they are so excited when they see them ushering their parents and family to their seats, or meeting them at the front door.’

She added: ‘Congregations are a special time and without the regular support of staff helpers, we would not be able to deliver to the standard that our students have come to expect. My team and I would like to say a very big thank you to all concerned.’

A few of the staff involved in the Medway and Canterbury ceremonies in November were:

Welcoming students and their guests 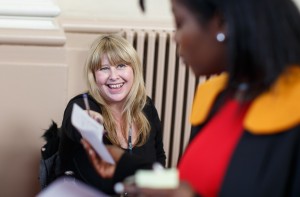 Micky Dalzell (Medway campus administration) helped out with ticket allocation and extra ticket sales at the Medway ceremony. She said: ‘It went a lot better than previous years because it was all done on online for the first time. It saved graduands a lot of time.’ 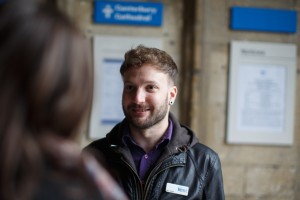 Ben Tipple (Partnership Development Office) was on the south-west door of Canterbury Cathedral – welcoming and answering queries from guests and graduands. ‘We had the usual problems,’ he said, ‘such as people being frustrated by the wait outside. It’s a case of facilitating these and making sure people are treated in the right way and having a nice time. Everyone was very happy – there were lots of pleased and smiling faces and, in the end, that’s all that matters.’ 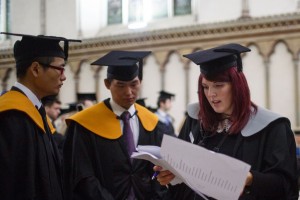 Helping with student registration and the procession at Canterbury was Lisa Tallis (Student Records and Examinations). She said: ‘It involved making sure that students were seated correctly and went up at the right time. I have done Congregrations every year since I have been here – it’s nice to see students come in and go out. You also get to meet other members of staff who you usually only speak to on the phone. It’s a nice day to be part of.’ 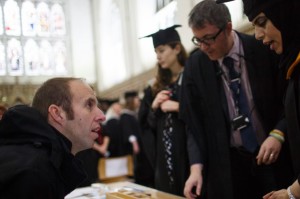 Also helping out with registration was Tim Warren (Kent Hospitality Finance Department). He said: ‘I have done it for a number of years. I like the fact that you see students when they arrive and when they depart – you see the whole process through. I love doing it and will volunteer again next year. It’s nice to give something back, and it’s good to represent Kent Hospitality as well.’ 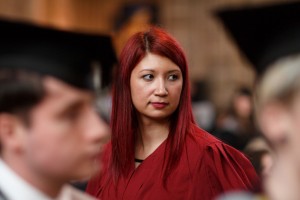 Sara Witchell (Student Support, School of Politics and International Relations) was an usher in the Cathedral – and said that, considering it was such a busy ceremony, it went very well. ‘I have been helping with Congregations for about 16 years, since I’ve worked at the University. It’s changed a bit along the way, but I’ve enjoyed seeing the students and their reaction to seeing you. It’s a great day for them and their families and, at the end of the day, that’s what we’re here for.’

Ensuring that everything within the Cathedral proceeds in an orderly fashion – from fulfilling guests’ expectations to giving students the right certificate – is the role of the Ceremony Marshal. This essential role has been ably filled at Canterbury for many years by Dr Michael Hughes (Senior Lecturer in English Language and Linguistics). 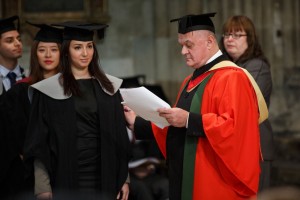 Michael commented: ‘I am very much part of the ‘team’ which includes the Chancellor, Vice-Chancellor, the Deans, the Director of Music, Security, and many helpers from various parts of the University administration. This year, the three ceremonies at Canterbury went very well considering that two of them had over 400 graduating. Although much of the work is done before the day, it is always necessary to keep alert for last-minute changes, updates and some late arrivals. This all has to be achieved seamlessly without anyone noticing. Everyone involved always feels exhausted after a day of ceremonies, but with that great satisfaction of a job well done!’ 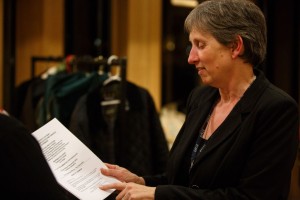 The role of Karen Bee (Academic Division) at Canterbury was also extremely varied – she worked alongside Lorna Parrett to ensure, for example, that academics processed in the right order and sat in the right place within the Cathedral. Karen said: ‘It was a hectic day – these were big ceremonies involving lots of students and, as it’s the end of the year, staff were all very tired. But I think that the day went as well as it does every year.’ 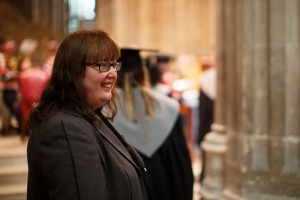 Another ‘jack of all trades’ at both Medway and Canterbury ceremonies was Jo Pearsall (Council Secretariat). Jo was helping Sue Wanless, Ceremony Director, in the first ceremony, looking after students in the Cathedral, setting up the dais and assisting Lorna Parrett with background planning.

“I think it’s important for staff across the University to be involved in the ceremonies.” – Jo Pearsall

She said: ‘I think it’s important for staff across the University to be involved in the ceremonies. There are many different aspects: from looking after all the guests coming in, to putting on a good show, getting all the students through in right order, with the right certificates, looking after academic staff and guests, and organising the music. It’s easy to think it just happens and nothing changes. It does change every year and it’s a mammoth undertaking. It’s always exhausting!’

The next University Congregations take place in July 2015. Watch out for an all-staff email in end of April/May telling how you can sign-up to get involved!

The University’s EDI Team provides advice and support to staff covering all areas of equality in employment.

Other sources of support include Occupational Health, Counselling Service, HR Advisers, Chaplaincy and a Mediation Service.

A service which has recently been updated is the Harassment Contact Network. Harassment Contacts provide advice and support to staff and students who suspect they are being subjected to any for form of bullying or harassment, for example, sexual orientation,or any protected characteristic.

EDI staff networks offer employees a chance to network and share ideas on creating a more inclusive working culture. If you would like to get involved visit the EDI website: http://www.kent.ac.uk/equality/.