School of History Professor Julie Anderson has appeared on BBC’s ‘Who Do You Think You Are?’ helping comedian David Walliams find out more about his family history.

Julie provided David with some information on his great great grandfather, who was a patient at Salisbury Infirmary in 1884, suffering from cataracts. You can watch the full episode on the iplayer here, and Julie has shared more about her appearance with the School of History team…

What was it like being on ‘Who Do You Think You Are?’

Being on the show is really good fun. When the researchers call you months in advance, you have no idea of the identity of the person you are going to be working with – it is revealed shortly before you start filming. Before that, there is lots of discussion and the researchers on the show get tips from you about what they should be looking at and images and documents that might work on tv. The crew was so professional and patient and they made me feel relaxed.

David is obviously an experienced professional who was funny in real life, and curious about his family. He was tall too.

Did anything funny happen while you were filming?

When we were standing outside doing our ‘meet’, people kept recognising David and shouting hello to him. But most people were really respectful as they could see we were working.

Not really – I have done TV before and I did a WDYTYA before with Martin Freeman before I came to Kent – I did a lot of work on his show as it was centred on the sensitive topic of venereal disease – that time I ended up on the cutting room floor – which can happen with TV shows as they only have so much time to present everything. It was disappointing, but working with Martin and the crew was great and I remember laughing all day.

What is the strangest thing about doing a tv show like WDYTYA?

Probably all the walking and pointing. You have to make sure you have nice clean nails as you have to point to lines on documents. What goes on behind the scenes is a surprise – our cameraman was contorting himself in all kinds of ways to get the best shot, and you have to try and not notice. There are lots of people in the space – producers, director, camera and sound persons, so it is not as ‘intimate’ as it looks. There were about seven of us in a little staircase. 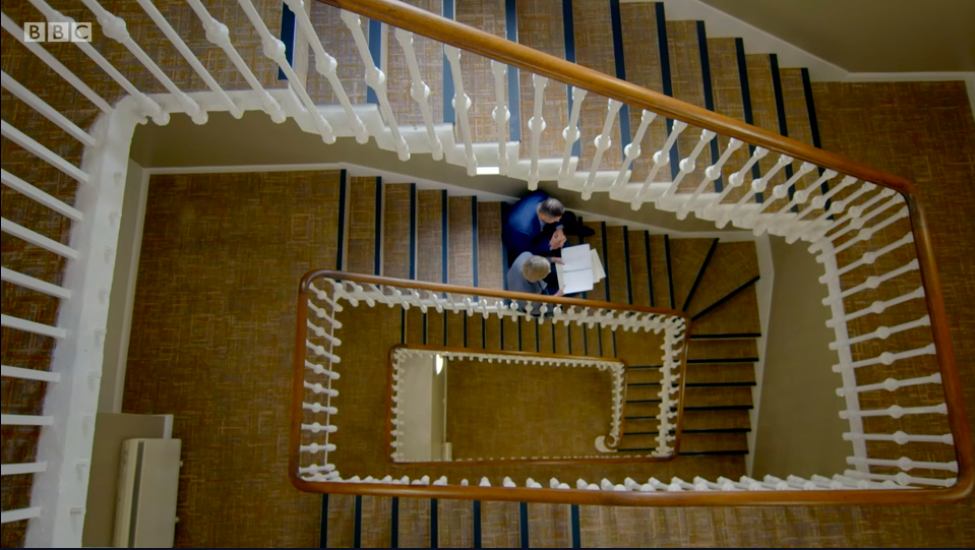 Did the segment take a long time to film?

That is one of the oddest things about performing in front of a camera. It takes a really long time to do the filming, so that the director is satisfied. Things can go wrong with the sound and you have to wear a microphone which attaches to your clothes – it is usually stuck under your jacket and then a pack with batteries attached behind you which is really heavy and is why I always wear trousers. I sat in a stairwell with David for at least an hour and a half and I was numb and stiff when I finally got up, even though we took breaks to get different camera angles. You have to do the same thing over and over with different camera angles.

Is filming WDYTYA different from other types of tv?

It is because you are moving and engaging. In a lot of tv historians are talking heads and you stand or sit in a chair. When you are walking and moving it is harder. And when the enthusiasm for history overtakes you, you often forget yourself and get really enthusiastic. With tv you have to think about where your body is in relation to the camera and not bump your microphone.

Did you ever think that being in front of a tv camera would be part of your job as a historian at a university?

Never! I thought tv was only for male historians who did war and royalty. It is good to see a more diverse range of historians on tv these days. I have done a couple of programmes a year since 2011, and I really enjoy doing them.

Who are the people you enjoy working with the most on tv programmes?

I really enjoy working with the researchers and producers. They work so hard to get the context and interpretation right, and there is a lot of communication before the programme is filmed. Interestingly, they often have History degrees, so that may be something for our students to consider as a career in the future.

What did you learn from David Walliams?

He gave me instructions on how to walk up stairs when you are being filmed from above. Not necessarily a life skill necessary to a historian, but you never know.