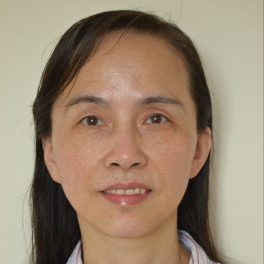 A tribute to a well-loved and much admired former staff member from her colleagues at the School of Physical Sciences.

Dr. Jingqi Miao was a member of our small community for 20 years and the sad news of her death have been deeply felt across it. Since Thursday, when we received the message informing us of her passing, many messages have been exchanged, remembering her and her time working with us. They have been written equally by those that had known her for many years and by those who have joined our little family more recently. All the messages highlighted three things: her kindness, her hard work and her commitment to the work we try to do every day at University. The consistency of those memories shows another key aspect of who she was: the honesty of her character.

Her influence in the School was felt at many levels and, as such, it seems appropriate that our tribute is a collective one, built with the memories and experiences of four people that met her and worked with her on keys aspects of academic life, and representing all of us.

The first one is from Dr. George Dobre:

“Jingqi’s working life and career was inextricably linked with the University of Kent’s School of Physical Sciences (SPS). I, like many of us in the School, have known Jingqi for nearly two decades. She will be remembered as a kind soul and always have a special place in our hearts.

“The first thing I recall about Jingqi’s introduction to academic life is that it could not have come at a more challenging time, as certain subjects like Physics were facing a shortfall in Higher Education funding. After taking up her academic post at Kent in 2001, Jingqi was immediately confronted with the considerable task of increasing undergraduate student recruitment in Physics and Astronomy. But the challenge of her appointment as Admissions Tutor was not daunting for Jingqi – this quickly became a role she relished and made her own. The increase in recruitment that she helped generate meant that the School could plan ahead for an ambitious expansion, and set it up for success in the next decade or so.

“She did this while at the same time developing her research in an area close to her heart, linked to the fundamental question in Astronomy: “how are stars born”?

“Jingqi was successful in making a powerful case for renewing funding from the Particle Physics and Astronomy Research Council to establish “Space school” which quickly became an annual SPS tradition. This event ran in the summer every year from 1999 (and was only suspended in 2020 due to COVID), hosting around 50 young people who attend lectures (internal and external speakers) and do mini-laboratory projects on space subjects, hugely helping outreach efforts and giving SPS regional and national visibility.

“Jingqi’s research expertise was the dynamic evolution of molecular clouds, and she used it to reach out wider to other groups. This led to a very practical application of her space science expertise. One such example is our joint funded work on the use of ray tracing and modelling the flow of smoke particles in order to lead to optimised fire detection, which led to new designs and patents by a local Kent company. This was truly an inspiring example of how knowledge gained by studying star formation can improve human lives here and now!

“As a former Director of Undergraduate Studies for Physics and Astronomy, I was impressed by how Jingqi achieved a feat almost unique among academics in the SPS: during her 18-year academic career, her teaching covered all five stages of the undergraduate curriculum, from Foundation Year all the way to the final year of the integrated Master degree. This extensive involvement could not have been possible without Jingqi’s selfless work ethic, her eagerness to do her best and not let anyone down, working closely with almost every single academic in Physics and Astronomy. During this time, she also successfully supervised MSc and PhD students who went on to become academics in their own right.

“One of my great pleasures recently has been revisiting communications with students from the last two decades, in which I found many instances where they spoke highly of Jingqi’s help and determination to see them succeed. This is after all what made Jingqi’s contribution special and lasting – having helped shape the minds and spirit of so many generations of alumni, Jingqi’s memory lives on through them.”

The second one is from Dr. Chris Solomon:

“For many years, JinQi and I had offices 3 doors apart on the 2nd floor of the Ingram building. She had the habit of sometimes leaving her office door slightly ajar. Passing by, seeing her beavering away on her computer by the window, I would often pop my head round the door and have a chat – sometimes a short one if she was very busy with her work – and sometimes much longer. Like most young academics, we’d usually discuss our aspirations and interests in our academic careers, our families, and gossip a little about departmental matters. My one abiding impression of those times is that of her dedication and innate love for her work. Modern academic life has many pressures to ‘perform’. It is all too easy to be swamped by them and lose touch with the spirit of enquiry, the very reason why we chose an academic career in the first place, yet JinQi managed to hold onto a certain innocent passion for her work. For me, she was the ‘genuine article’.

“JinQi and I worked in separate fields and others are doubtless better qualified to pay tribute to her specific scientific work and contributions. I must speak of her personal qualities which I think were evident to everyone. She was kind, modest, hardworking and 100% genuine. You felt instantly her openness, decency and good heart. Well-liked and respected by all in the department, she was in fact the kind of colleague that made the School a better and happier place to be in.”

Prof. Michael Smith’s tribute, whose research is closest to Jingqi’s, is next:

“Jingqi’s research was appreciated across the world. Her work on the origin of stars will hold a special place in the future development of the subject. Using computer simulations, she showed how interstellar clouds would change shape before collapsing into proto-stars. She had developed a computer code which incorporated all the necessary complicated physics. And she would have gone on to exploit this. However, her seminal papers on the theme of triggered star formation remain for others to read and build on.

“Jingqi was a delight to work closely with. Never a complaint. Always pragmatic. Her attitude is encapsulated by this comment from a student attending her last set of lectures on Stars:

“It is clear that she has made extraordinary effort to improve her teaching methods in the time that I have attended this University, an effort that has not gone unnoticed and should be recognised.

“She thus gained respect from the students, even though she would not hesitate to tell them when they were lacking effort!”

Next, some words from Prof. Glenn White (Open University and STFC). Jingqi was his post-doc initially and she moved to Kent when he moved here:

“I originally hired Jingqi as a PostDoc into my astronomy research group at Queen Mary College, University of London, in the late 1990’s. Although her scientific background at that time was not in the astrophysics field, her theoretical modelling abilities proved to be an excellent fit to our need for a ’Theoretician’ at the time, and she was immediately able to make an impact through her theoretical modelling applied to studies of star formation. Whilst at QMC she wrote a number of seminal papers in the field related to the way that young stars are born in the vicinity of other groups of stars, including studies of the famous Eagle Nebula that some of her most creative modelling was centred on.
“A couple of years after Jingqi joined QMC, I moved from QMC to The Centre for Astronomy and Planetary Science (CAPS) in the Kent School for Physical Sciences, which was then housed in the old Physics Building, and I was pleased that Jingqi chose to, and was able to relocate to Kent to continue her work. This had a long-standing affect on her life, career and scientific work, particularly after she moved into a permanent Lectureship. From Kent, she extended her previous research work to study the way that hot, young stars, could illuminate their surrounding environment, and through their radiation, trigger future generations of young star formation, and to produce the beautiful nebula structures that permeate our Milky Way Galaxy. She was almost unique in starting this research area, and she started to build a considerable international reputation of her own. She and I, and other present and past members of the Kent CAPS group have both benefitted from, and continued to work on these scientific problems with her for many years.
“I always found Jingqi an absolutely delightful, totally dedicated, happy, and hard-working scientist, who clearly loved, and was fulfilled through her work and strong ethical approach. Even after I had moved to The Open University from Kent, she and her husband, Fei, always remembered to send me a Christmas card every year, even up until last year, and I was very happy to continue to hear from her.
“I am obviously very sad to learn of her passing, it serves as a reminder to us all of the inevitability of our mortality, and reminds each of us to enjoy every moment that we can make an impact on those around us.”

The closing tribute from us is from her last PhD student, Dr. Tim Kinnear

“I first met Jingqi in 2009. I had applied to study for a PhD with her and travelled to the University of Kent for my interview. I had read through several of her papers in preparation and was nervous about how I would do. From that earliest point I recall how welcoming and pleasant she was, putting me at my ease, and helping me become further enthused for the subject by speaking with her.

“I began my PhD with her later that year. For the next several years I worked on computational simulation with her as my supervisor. She was uniformly and endlessly supportive and kind in her advice and guidance. I never felt I was without someone on my side and willing to support my progress.

“I made my way through my PhD, and continued to work at University of Kent. She helped me integrate into the difficult realm of academia, never faltering in applying her understanding approach to people, pleasant words and helpful advice.

“I am eternally indebted to Jingqi, as a supervisor, colleague and person who I could admire for her wonderfully kind nature, support and enthusiasm for science.”