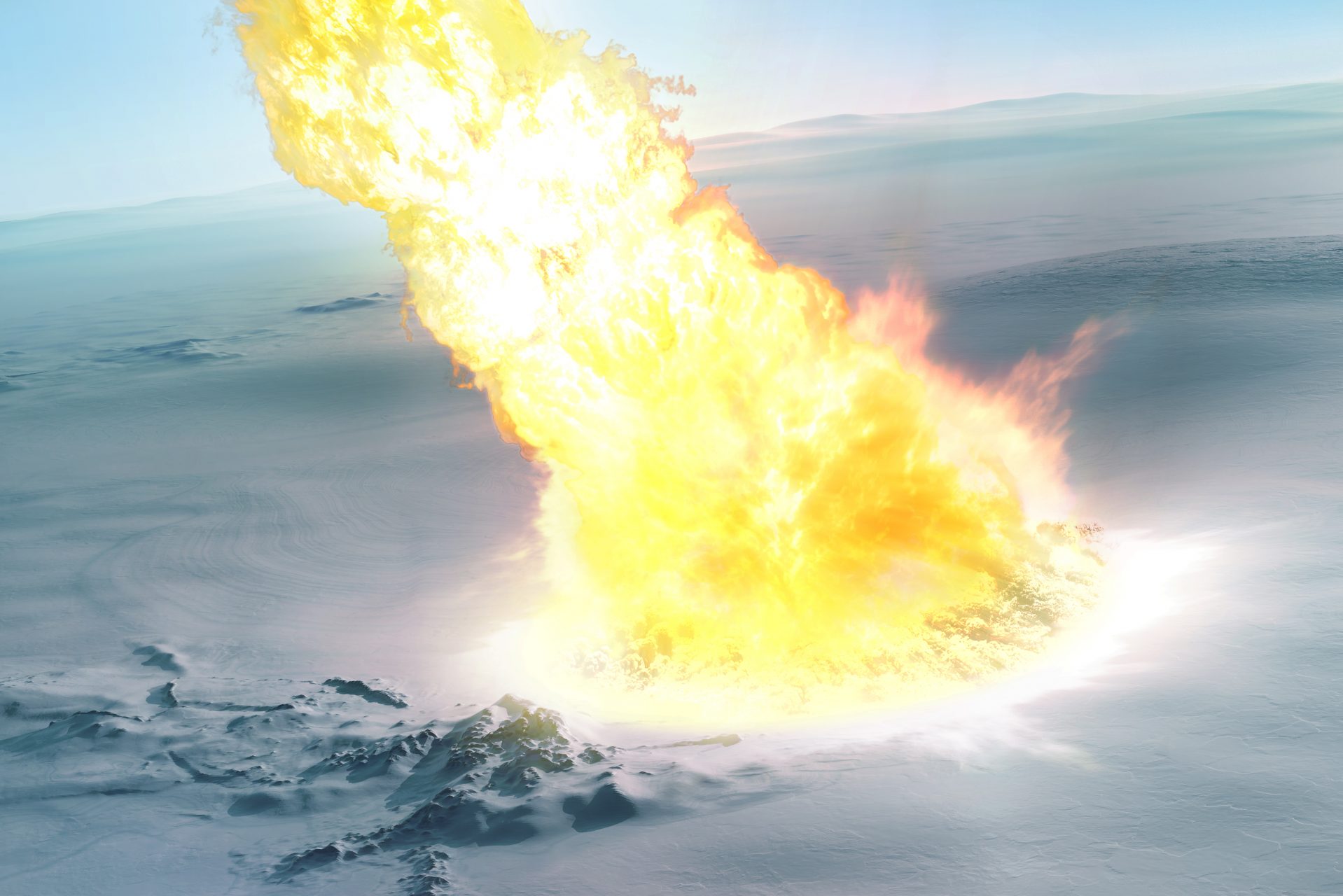 A research team of international space scientists, led by Dr Matthias van Ginneken from the School of Physical Sciences‘ Centre for Astronomy and Planetary Science, has found new evidence of a low-altitude meteoritic touchdown event reaching the Antarctic ice sheet 430,000 years ago.

Extra-terrestrial particles (condensation spherules) recovered on the summit of Walnumfjellet (WN) within the Sør Rondane Mountains, Queen Maud Land, East Antarctica, indicate an unusual touchdown event where a jet of melted and vaporised meteoritic material resulting from the atmospheric entry of an asteroid at least 100 m in size reached the surface at high velocity.

This type of explosion caused by a single-asteroid impact is described as intermediate, as it is larger than an airburst, but smaller than an impact cratering event.

The chondritic bulk major, trace element chemistry and high nickel content of the debris demonstrate the extra-terrestrial nature of the recovered particles. Their unique oxygen isotopic signatures indicate that they interacted with oxygen derived from the Antarctic ice sheet during their formation in the impact plume.

The findings indicate an impact much more hazardous that the Tunguska and Chelyabinsk events over Russia in 1908 and 2013, respectively.

This research, published by Science Advances, guides an important discovery for the geological record where evidence of such events is scarce. This is primarily due to the difficulty in identifying and characterising impact particles.

The study highlights the importance of reassessing the threat of medium-sized asteroids, as it is likely that similar touchdown events will produce similar particles. Such an event would be entirely destructive over a large area, corresponding to the area of interaction between the hot jet and the ground.

Dr van Ginneken said: ‘To complete Earth’s asteroid impact record, we recommend that future studies should focus on the identification of similar events on different targets, such as rocky or shallow oceanic basements, as the Antarctic ice sheet only covers 9% of Earth’s land surface. Our research may also prove useful for the identification of these events in deep sea sediment cores and, if plume expansion reaches landmasses, the sedimentary record.

‘While touchdown events may not threaten human activity if occurring over Antarctica, if it was to take place above a densely populated area, it would result in millions of casualties and severe damages over distances of up to hundreds of kilometres.’

The extra-terrestrial particles (condensation spherules) examined in this study were found during the 2017-2018 Belgian Antarctic Meteorites (BELAM) expedition based at the Belgian Princess Elisabeth Antarctica Research Station and funded by the Belgian Science Policy (Belspo).