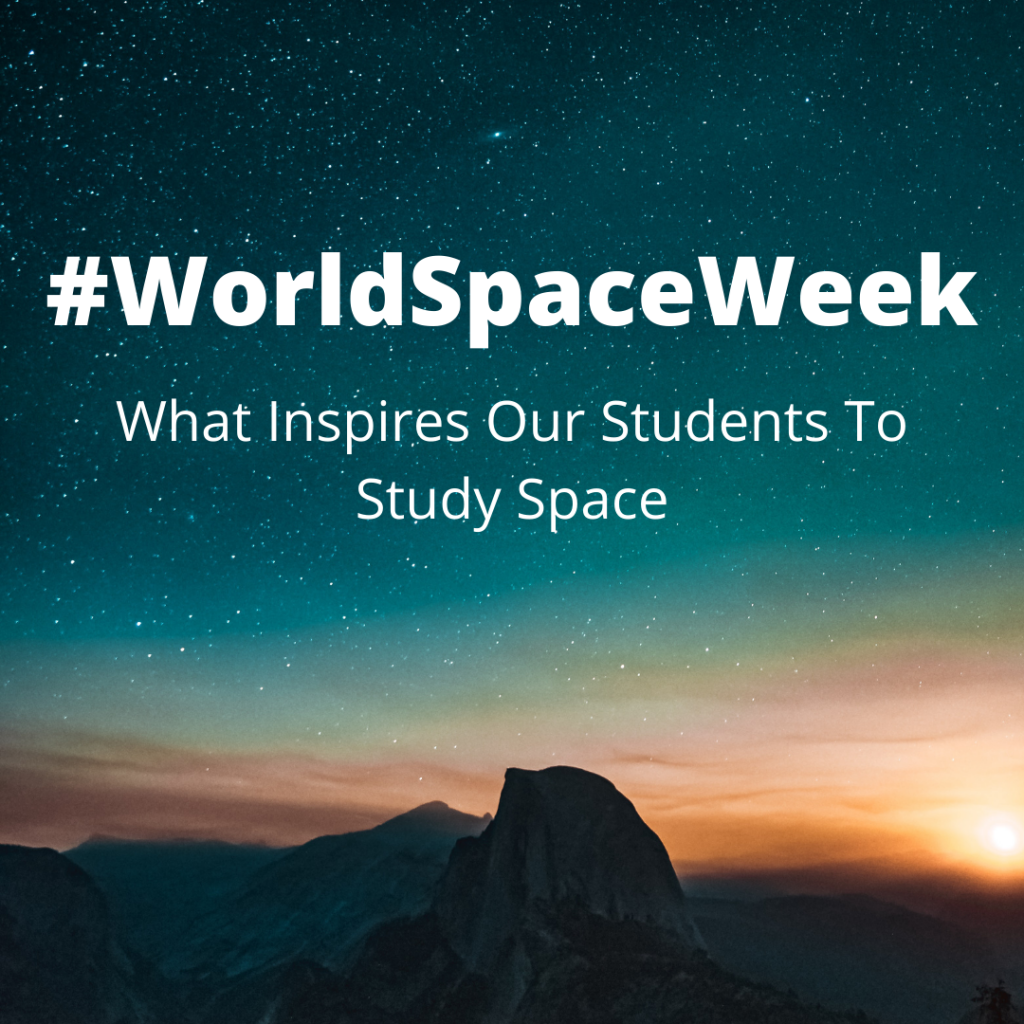 As part of World Space Week for 2020, we asked two of our students to tell us why they love space and chose to study it at University. I love studying space because there, quite literally, are endless possibilities with it. There are so many applications of other areas of physics in space too, be it thermodynamics, electromagnetism or mechanics. We will never know everything there is to know about space so there is always going to be new and exciting things to study in the field!

My favourite area of space to study is massive star formation and radio astronomy. The evolution of stars and the process of them being formed has become oven more fascinating after I completed an internship here at the University of Kent with Dr James Urquhart! The internship involved determining the statistical lifetimes of high mass stars, so, how long a star spends in each stage of its life, and as a result of this internship I am a co author on a published paper.

The paper is to do with ATLASGAL – the survey that provided the sources I was using during the project and I’m also in the process of writing up my results from the internship for publication. I’ll never forget it. Five years old, with Christmas only weeks away, my parents had made the perfectly innocent decision to take me and my sister to meet Santa Claus. With extra hours worked and much preparation, we flew out to the wilderness of Northern Norway, and were all ferried to a log-cabin far from civilisation, which we were solemnly told was where we would meet the man himself. Unfortunately for my parents, I had spent the preceding week watching ‘Jurassic Park’, ‘Back to the Future’, and ‘Star Wars’ practically back-to-back, and was beginning to take an active interest in science.

Thus, when I was introduced to a kindly-looking Norwegian man dressed in red – with the fullest beard this side of Thessaly – and asked (when I was five and asked) if I had a question for Santa, I didn’t ask whether I had been good enough to get my presents this year like my sister; I asked ‘How do you get around the world in one night? Does it have something to do with the space-time continuum?’ The Norwegian looked blank and spluttered a ‘yes’, keen to move on to more traditional questions; for me, though, it was the first time I’d had an opportunity to ask (what I thought was) an expert about a scientific matter, and it only served to stoke that nascent interest.

From there, it was a light-speed journey to questions about space – the nature of the planets, stars, supernovae, black holes, dark matter, the galaxy and its structure – and once the seal was broken, there was no stopping the flood of queries.

When the time came to consider post-A Level study, I knew that I wanted to pursue Astrophysics at an institution whose course was engaging, whose staff were passionate and active in astrophysical research, and where there were plenty of opportunities to ground myself in such a vast discipline. The University of Kent was then a natural choice, with my chosen course of Physics with Astrophysics giving me the opportunity to pursue those questions that I’d often wondered about, as well inspiring new ones.

One of the opportunities afforded here really stands out though – an internship with Dr Urquhart, head of the Centre for Astrophysics and Planetary Science here, and a man thankfully far more qualified than Santa to study the science of the Universe under.

Over the course of 10 weeks, I undertook an individual project into stellar formation and its connection to the structure of the Milky Way galaxy; this used data from two recent and highly expansive radioastronomy surveys – SEDIGISM (which investigated molecular gas clouds and their properties in the southern Milky Way at a very high resolution) and ATLASGAL (which investigated denser gas clumps and their characteristics over a similar spatial region).

Now, my project followed a somewhat extenuate logic, which went something like this; the molecular clouds investigated in SEDIGISM are typically associated with the spiral arms of the galaxy; these dense clumps are found embedded within the far more diffuse molecular clouds, and form the evolutionary foundations of stars. By matching the clumps to the clouds, the approximate rate and efficiency with which stars form from such clouds could be determined, and then studied to see whether there is any correlation between star formation in the clouds and association with the spiral arms of the Milky Way. Such analysis was achieved using a databasing language called SQL and a coding language called Python; I filtered the data to create a new SQL catalogue containing only clouds and those clumps embedded within them, and then extracted the data via Python to create a series of plots of the population distribution against variables like distance from the galactic centre.

After this was completed, Dr Urquhart decided that my research was relevant and well-conducted enough for publication, and it formed a significant portion of a paper published in the Monthly Notices of the Royal Astronomical Society.

In fact, my summer project continues to have a lasting impact on my life; my Masters Thesis is a more comprehensive extension to the work I undertook during that time, and this field is the one I hope to pursue in doctoral and post-doctoral study.

Space is, and has been for the last 17 years, a major part of me, and I look forward to seeing where further study of it will take me in the years to come.

Join the conversation using #WSW2020 on social media or share what inspires you to study space in the comments below.