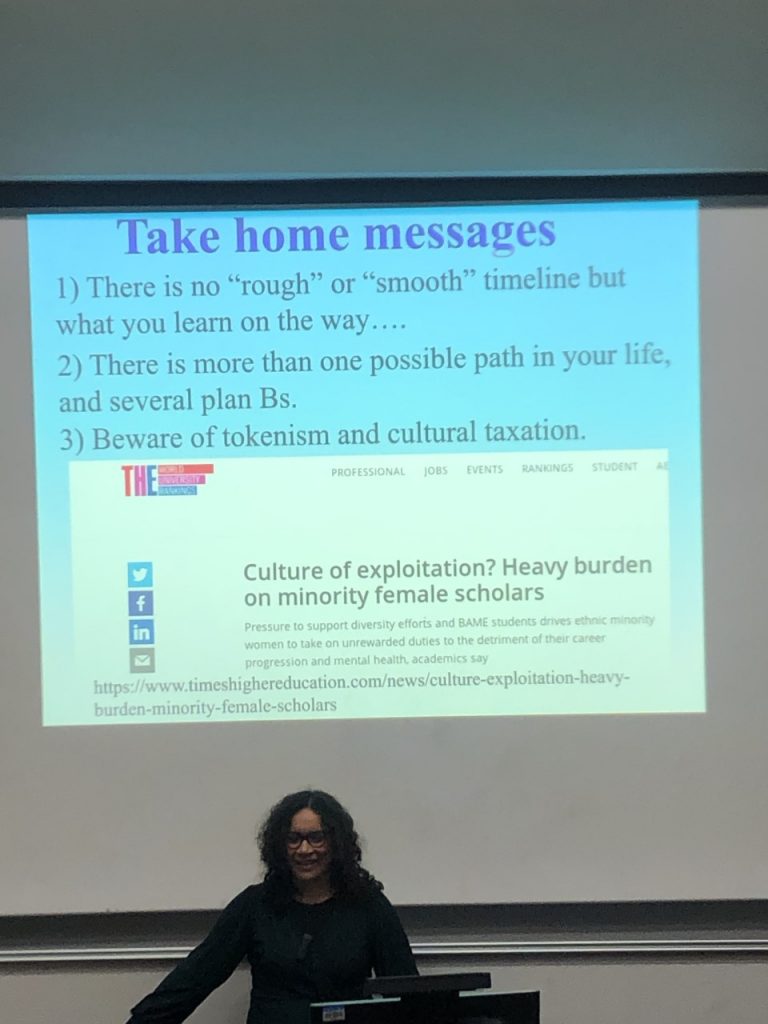 SPS student Stefania tells us more about the event she attended, with three other students from the School, at UCL last month.

On the 27th of march I attended the “Black Role Models in STEM” conference at UCL. It was one of the best events I have been to; to see all of that black excellence made me feel  included and not alone. It was amazing to hear stories from people that have been through what I have with racism and colourism and still go out on top.

All the speakers were amazing, and all transferred onto us a sense of energy and motivation to do better and not to listen to what anyone else says about who you can become. The speaker I connected with the most was Prof Carla Faria, she is afrobeiges and a physicist. She is specialised on theoretical strong-field laser-matter interaction, she has 80 publications, as well as being invited as a speaker in number of events and collaborations with a number of notable people.

From a young age she was an eccentric person, so she was never really bullied in school because of her skin colour, she didn’t care about fitting in and she enjoyed bringing the best out of the natural features she was born with; “you have a big nose” and she would reply “It’s like Dark Vader’s” or when people would comment on her crazy curly hair she didn’t mind because scientists have crazy hair.

Sadly, the racism came from her own family, too black for the white side and too white for the black side. She explained this as a race brainwash that Caucasians did on black people. They made us believe that lighter skin would have more privileges, and it all started from slavery, where mixed-race people would have lighter/nicer jobs to carry out compare to people with darker skin; from there, this hate has been passed down to entire generations, to the point it still very relevant today. The only problem with this is that white people don’t see mixed-race people as white, they see us as black. And now they have created a division between the black people, so that we can keep on arguing and killing each other. Prof Faria described it as clearing the population by bringing white people over and that is exactly what the painting is showing. From right to left the skin colour gets lighter and lighter, finishing with a white baby.

Some of her take home messages were:

The second speaker was PhD student Luke Davis and the title of his presentation was “Daring to dream and daring to succeed as a black man in physics”. He is of mixed Caribbean heritage who grew up in Oxfordshire. He initially got rejected from Cambridge, but he didn’t let that bring him down and ended up studying at Swansea and later University College London. However, due to a lack of black representation in physics he began to felt isolated.

His take home messages were:

Third speaker of the evening was Dr. Amna Shaddad; the main focus of her talk was about “mental slavery” in academia. She didn’t talk much about her past but focused more on advices, some of which I discuss below.

The last but not least speaker was Dr Nira and his presentation was entitled “You don’t need anybody’s permission to be a great mathematician”. From a young age Dr Nira always wanted to be a mathematician. In primary school when he expressed his feeling about his dream to the teacher the reply was “Someone of your build should be a boxer not a mathematician” and the sad thing is that he believed it. Sad because you cannot say that to a kid, any kid, no matter of the skin colour or background, the worst thing an adult can do to a kid is to get rid of the ability to dream and think.

When he told what happened to his parents, they told him “You don’t need anybody’s permission to be a great mathematician”. Unfortunately, young Naira did not think his parents were saying the truth because they did not go to school and so he believed the teacher was always right.
However, his love for maths did not end there, he continued studying mathematics in University, but he did not believe he was worthy of doing a PhD.

After being to a variety of maths conferences he finally decided to apply for a PhD and his first feedback said “You are weak and naïve if you think you can do maths.” After that Dr Nira decided to stop trying, he believed that the people were right, so he decided to just carry on with his life.

Similar thing happened to his son, he wanted to be a mathematician and when he expressed his feeling to the teacher the answer was “You can never be a mathematician, you can be singer”. Hearing that gave him the courage to follow his dream and become a mathematician. At the age of 35 years old he started his PhD in mathematics that took him 9 years.

The first thing he did was helping finishing the HMS Queen Elizabeth aircraft even though the other doctors working on it thought he wasn’t good enough at the start.

Do not waste your time, let’s stop hurting each other and let’s start to uplift one another. And as Dr Nira said “You can be the first but make sure you are not the last.”

Thank you to Stefania for telling us more about the event – we hope to fund more exciting and inspiring activities like this going forward, watch this space for more information on available funding from the School.