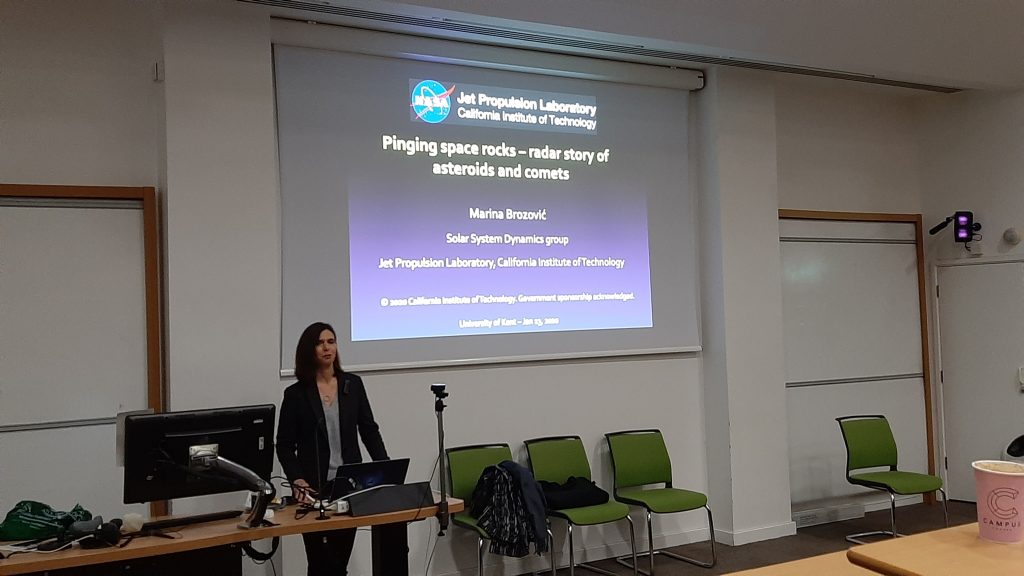 At the end of last month SPS welcomed Dr Marina Brozović from NASA’s Jet Propulsion Laboratory to the School to discuss some of the most important radar contributions to the field of planetary science. In this blog post, Masters’ student Jack Finch tells us more about the talk, and how it is helping him with his study.

When studying the asteroids and comets contained within the Solar System, difficulties can be encountered when attempts are made to investigate their shape, size and surface features. The talk presented by Dr. Marina Brozović, highlighted the method of radar imaging utilised to overcome the problems that have previously hindered the study of small Solar System bodies.

Alongside this, the application of radar has been found to help with the determining of the orbits that these objects follow, and how these orbits will change over time. This insight into the future motion of small objects is extremely important for ones that are classed as potentially hazardous, as it supplies the ability to assess the impact possibility of these objects. The importance of this is shown by the Chelyabinsk air-burst event, in which the meteor remained undetected prior to its entry into the Earth’s atmosphere.

The second half of the talk focused heavily on the reasons why gathering information about the asteroids and comets that are potentially hazardous is an important task. The physical properties of these objects control how they will behave and the damage they will cause in the event of an impact with the Earth.

“This was particularly interesting as the project for my Masters degree is centred around the impact process.”

Whilst this is an important aspect of the study of small Solar System bodies, another is the insight they provide into the formation of planetary systems and how they evolve over time. These objects provide a glimpse at the materials that were available at the time of formation for the Solar System, an insight that cannot be obtained through any other body.

This is especially true for the two interstellar objects (Oumuamua and 2I/Borisov) which arrived in our Solar System after their ejection from the system in which they formed. These are the first two objects in our Solar System known to have undergone this process. Whilst the compositions of other comets and asteroids give us insight into our own home system, the study of these two objects allow us to further our understanding of the formation processes in other planetary systems; information that cannot be gained through the simple observation of these distant stars.

Whilst the two known interstellar objects can be studied briefly with ground based observations, due to the nature of their unbound orbits they will eventually disappear into interstellar space again.

“After the completion of the talk, there was an opportunity to hold a fragment of the 2015 Chelyabinsk meteor. This was particularly interesting, being able to see a small part of one of the objects up close.”

Overall, the talk provided several intriguing points about the future possibilities of this area of research, especially in the area of locating small comets and asteroids, a group from which only a small percentage has been found. These smaller objects are particularly interesting as they are more likely to arrive at the Earth than the larger comets and asteroids often worried about, and as such could possess a much greater potential for the study of these objects in ground based laboratories.