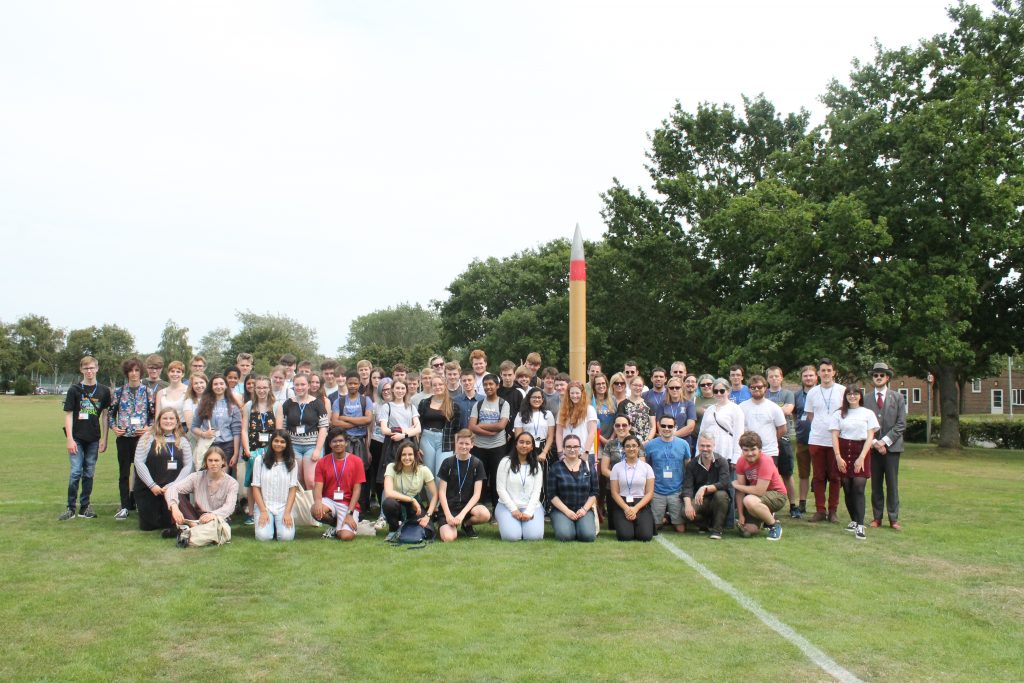 In honour of the first humans setting foot on the moon, this year’s Space School, held from Friday 2 to Sunday 4 August, had a lunar theme. From lectures on the latest lunar missions, to programming lunar rovers and more, students aged 15-18 got the chance to spend 3 days getting stuck into all things space, here at the University of Kent. SPS Physics student Anthony Quinlan reports on the weekend’s success.

Arriving on the Friday after a brief introduction, the weekend’s activities opened with a team-building icebreaker… or should I say “egg-breaker”. The teams had to design a lander for their egg-stronaut. The lander had to be suitable for asteroid; meaning no parachutes. This led to some novel designs and some splattered members of staff. The students then listened to two “inspiring and insightful” lectures given by Dr Agata Rożek and Professor Mark Burchell on their research here at Kent.

During dinner, the students and staff took part in a somewhat scientific quiz, which concluded with a dramatic tie-breaker question resulting in the SAT Elites becoming victorious. The evening has many highlights including the staff teams feeling the wrath of the quiz-master, and a surprise final question read out by Professor Jim Al-Khalili. We ended a very exciting first day with some calming astronomy at the Beacon Observatory. Students managed to observe Jupiter, a binary star system, and have a tour of our research observatory. The South East Kent Astronomical Society also brought along an incredible set of their own telescopes for the students to look through and answering questions from the students all evening.

Saturday started with a rocket design session, which used computer simulations to test the stability and capabilities of their rockets. The young rocket scientists had to keep a quail’s egg safe during lift-off and the inevitable descent back to the ground.

On Saturday afternoon and the following morning, students took part in two activities run by the SPS students. The first was an investigation of rocks and samples along with a tour of our laboratories. The other was a moon rover assault course in which students programmed a rover using the LEGO Mindstorm software after taking measurements of the course. However, as they found out much like real space missions there is always an element of chance and risk to any planned route. The teams employed logic, practice, and the occasional nudge with a meter stick to successfully navigate the course. Unfortunately, due to poor weather conditions, we didn’t get a second night of observing. Instead, we put on our gloves and safety goggles for some cool physics. Everyone loves watching bananas shatter into thousands of pieces after they have been frozen in liquid nitrogen. The quiz was brought back for another evening by popular demand, although it was clear from the staff team’s name “can we send them to bed yet?” we were all exhausted from a very eventful day.

The penultimate event on Sunday was launching the rockets. I can report that every team’s little egg-stronaut launched high into the sky, but sadly not everyone’s returned safely (one of those deaths may have been my fault…). Crash or no-crash everyone thoroughly enjoyed the experience. Finally, the students presented posters they made on a space mission involving the moon. There were certainly some out-of-the-box ideas displayed including fossil hunting on the moon and cheese-making while in orbit around the moon. The posters were judged by space school alumni who had returned for the anniversary. This allowed current students to converse with them about their time at space school and their achievements since.

Students and staff both had a fantastic weekend, and would like to thank the members of SPS that made it possible. We hope that with the continued support of our outreach team there will be at least another 20 years of engaging, teaching and inspiring events for young physicists.

Space School is a non-profit event organized by the outreach team at the School of Physical Sciences, staffed entirely by postgraduate students, undergraduate students, volunteers and academic staff volunteering their time over the weekend.

Applications for Space School 2020 will open in January 2020. If you have any questions, please contact science@kent.ac.uk