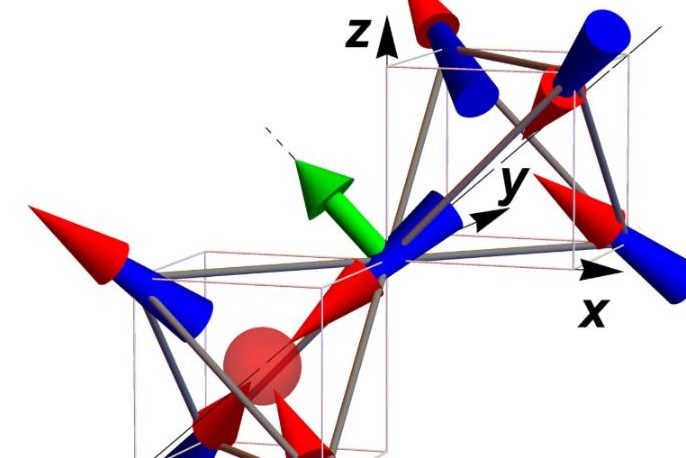 A breakthrough in understanding how the quasi-particles known as magnetic monopoles behave could lead to the development of new technologies to replace electric charges.

SPS researchers have been part of a team that has applied a combination of quantum and classic physics to investigate how magnetic atoms interact with each other to form composite objects known as ‘magnetic monopoles’.

Basing the study on materials known as spin ices, the team showed how the ‘hop’ of a monopole from one site in the crystal lattice of spin ice to the next can be achieved by flipping the direction of a single magnetic atom.

Although in theory at low temperatures the magnetic atoms do not have enough energy to do this, the team found that as a monopole arrives in a lattice site, it induces changes in the fields acting on the magnetic atoms surrounding it which enable them to ‘tunnel’ through the energy barrier.

‘We found evidence that this mysterious low-temperature hopping is achieved through quantum tunnelling: a phenomenon that allows a quantum object to overcome an obstacle which would, according to the classical laws of physics, require more energy than the system has available to it.”

Dr Jorge Quintanilla continues:‘We showed that the magnetic atoms forming a monopole experience fields that are transverse to their own, which in turn induce the tunnelling. We compute the monopole hopping rates resulting from this scenario and find them to be broadly consistent with available observations.’

The researchers suggest that this better understanding of monopole motion in spin ice materials may enable future technologies based on moving magnetic monopoles, rather than electric charges.

The study is the result of a collaboration between Kent, the University of Cambridge, the Institut Laue Langevin, the Max Planck Institute for the Physics of Complex Systems, and the ISIS Neutron and Muon Source, STFC Rutherford Appleton Laboratory. The research, entitled Correlated Quantum Tunneling of Monopoles in Spin Ice (Bruno Tomasello, Claudio Castelnovo, Roderich Moessner, and Jorge Quintanilla) is published in the journal Physical Review Letters.