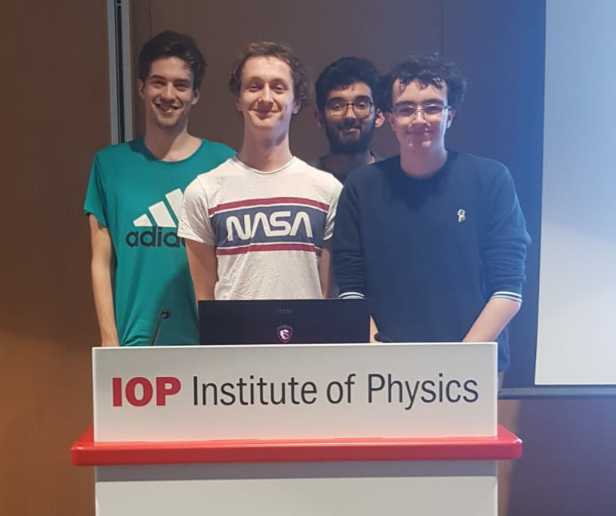 “We are thrilled to be chosen to represent the UK at the PLANCKS final after a weekend competition.

PLANCKS-“Physics League Across Numerous Countries for Kick-Ass Students” is a theoretical physics competition run by the International Association of Physics Students, to decide which country has the most “kick-ass” bachelor and masters students. The final for the competition will be held in May of this year in Odense, Denmark. The UK preliminaries took place at the weekend at the Institute of Physics (IOP) headquarters in London.

Nineteen teams from universities across the UK participated in the competition consisting of a four hour exam on the Saturday. While the rest of the weekend was left to network, attend guest lectures and socialise with fellow physics students.

At the closing ceremony firstly Portsmouth announced as the pub quiz winners from the night before followed by the exact result. The top three teams would all be going to represent the UK in Odense this May. In 3rd place Oxford, 2nd Edinburgh and in 1st place the Kent team, which was made up of 3rd year physics students: Anthony Quinlan, Andrew Gowers, Ibrahim Mirza and William Buffett.

We all had an extremely enjoyable time at the competition and are looking forward to representing Kent and the UK at the finals.”

Congratulations to Anthony, Andrew, Ibrahim and William! We look forward to cheering you on at the finals!