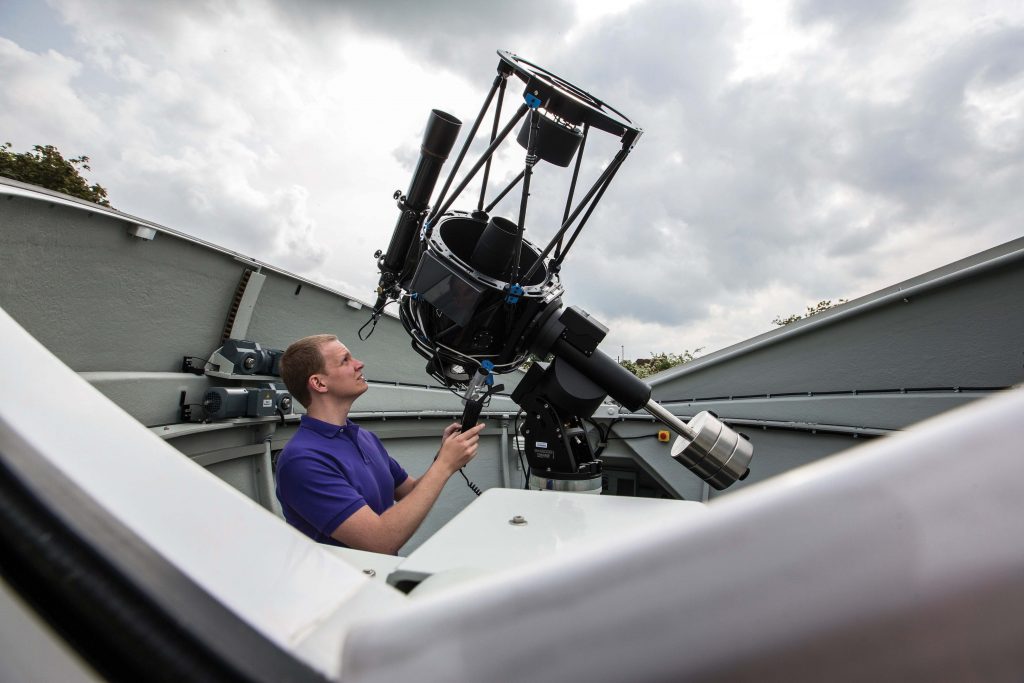 On the 4th September 2015 SPS opened up the brand new state-of-the-art Beacon Observatory. Three years on, Dr Dirk Froebrich gives us a round-up of how it has been used – within the University as well as to engage local Schools and the wider community – as well as a look ahead to the future.

The observatory has delivered on a range of projects over the last few years, here’s a summary of some of the key ones and how they’ve benefited our staff, students and wider community:

Including the new students for AY18/19, there will be 21 final year UG students who will have worked (partly) with observatory data for their final year MPhys project. Since last year we have also opened up the observations for all interested stage 2 and above Physics/Astro UG students and had a take up of 16 students during our trial year.

The supervision of these UG students during the observations has been made possible by the continued support for PG demonstrators from SPS. This has further allowed us to train the PG students in observational techniques and procedures to allow them to work independently on large professional facilities. The data from the weather station is now used in our 1st year UG programming course. We have started offering a tour of the observatory at our Open Days – which has proved extremely popular with potential students.

The observatory has featured prominently in our annual Space School events for 14-18 year olds August – which have seen us welcome 58 students onto campus in the last two years.

With STFC funding we have also started to trial an A-level student observing school (SPARK) – a three day event teaching to pupils and teachers the art of astronomical observing from the planning and data taking to data analysis and interpretation. Our first event had 12 pupils and 2 teachers from 3 local schools taking part, a second event is in planning.

Looking ahead, we hope to start planning for a Stargazing Life event early next year – watch this space!

The observatory also supports heavily our Citizen Science or Public Engagement with Science project (HOYS-CAPS) initiated in 2014. This allowed us to tap into UoK funds to present the project to Amateur Astronomers UK wide (14 talks already given, a further 16 more are scheduled) to increase participation and to advertise the project and set up a web-based interface (done by a Kent UG student from the School of Computing) for data upload and access.

We have now grown to 43 registered participants and are working to increase participation. A total of 1269 amateur datasets have been uploaded as of today.

We have so far published two non-refereed and two refereed papers with observatory data. They are all on star formation and properties of young stars. However, we have also participated in an observing campaign for comets by the Planetary Science Institute and follow up observations of transient objects detected by the Gaia satellite. Indeed, out of the 185 participating observatories, we have submitted the 5th largest number of follow up observations.

Currently there are two research masters students working on observatory data. We have recently welcomed a new PhD student to the School who has started work on analysing observatory and HOYS-CAPS data, while a new PhD student in the School of Maths will in part utilise data for a project on characterisation of randomly sampled time series. During this summer we also had a Nuffield funded A-level student who did a five week placement to measure rotation periods of young stars in our data set.

We are currently in the process of negotiating sharing some observing time with a network of Italian observatories, specialising in investigations of exoplanet transits.

All in all it has been a busy and successful three years since we opened the Observatory, but there is still more to come. Here’s to the next three, and beyond!

For more information about the observatory, including news and pictures, check out the Facebook group.