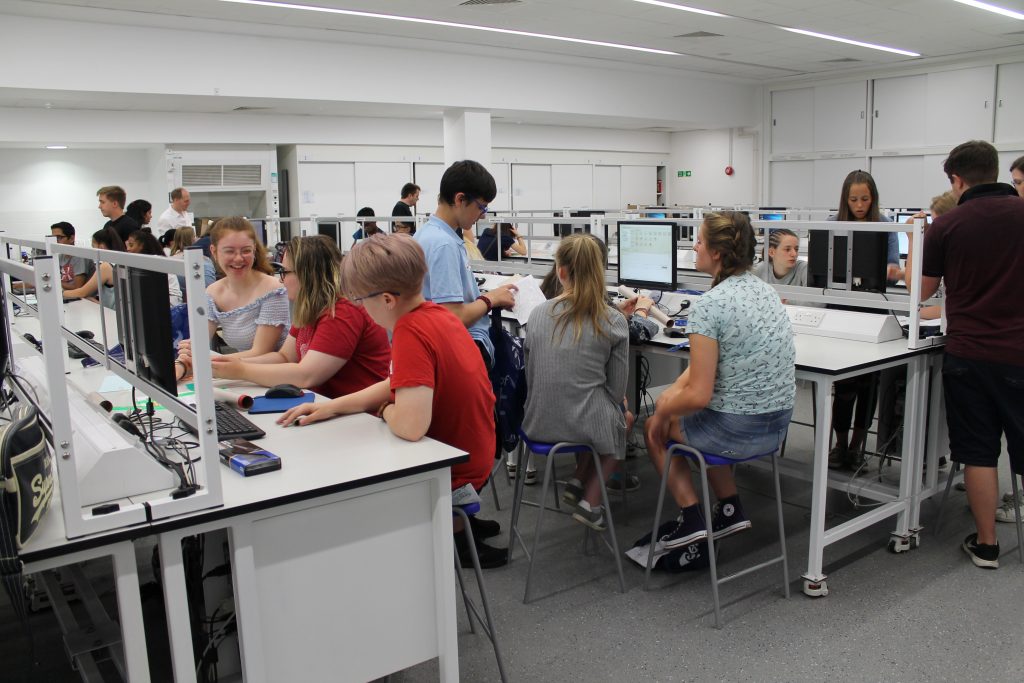 This Summer our dedicated team participated in two major Outreach events, working with not only the local community but also young Physicists from all over the UK – and abroad.

The annual Space School once again attracted keen young physicists aged 14-18 from all over the UK and even abroad to the University to experience all things space for a weekend from the 3rd – 5th August.

The weekend started with some excellent lectures by Dr Penny Wozniakiewicz, Dr James Urquhart and Dr Timothy Kinnear, which students said were inspiring. 36 students took part in projects run by SPS students Justyn, Sam, Luke and Ricky. These varied projects saw the students investigate impacts from the Light Gas Gun then designing, building and testing their own spacecraft shields to withstand a simulated impact; identifying meteorites from an array of rocks and minerals using non-destructive tests and planning their own mission to collect meteorite samples; and producing light curves that are used to detect exoplanets then using spectroscopy techniques to identify the atmospheric content of their discovered exoplanet.

The final day on Sunday, of course, brought the much anticipated launching of rockets that the students had spent the whole weekend designing and making in teams. This year many of the egg-stronauts managed to survive the landings, and the students all enjoyed watching the rockets get as high as possible! The also summer took SPS outreach back to the annual “bOing! Festival” on the university campus over the August bank holiday weekend, but this time with even more activities.

The Astrodome continued to bring the farthest reaches of space to students in 3D, giving them the chance to explore parts of the cosmos mostly seen only by the most powerful of telescopes. The liquid nitrogen ‘Cool Physics’ show drew all the ‘oohs and aahs’ from children and adults alike as bananas smashed and clouds were brought to the room. While the outside Crime Scene provided festival goers the opportunity to dress up in the protective wear and collect samples from a reconstructed crime scene. It was also the first outing for the SPS Forensics Dummies Fred, Ken and Linda.

Overall, the Festival was a great success and SPS was proud to play a part and work with and inspire the local community.