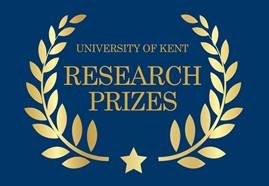 Kent’s third annual Research Prizes took place on 21 April, with 16 awards handed out to staff in recognition of their accomplishments over the previous 12 months.

The ceremony was hosted by Professor Catherine Richardson from the School of English, and the awards were presented by the Pro-Vice-Chancellor for Research and Innovation Professor Philippe De Wilde during a gala dinner held at the Darwin Conference Suite at the University’s Canterbury campus.

Professor De Wilde commended the high quality of applications received and congratulated the winners on their success:

‘The nominations highlighted the diversity of research, and the impressive achievements for which Kent academics and students are responsible. Such excellence made selecting sixteen winners particularly difficult, and as well as congratulating the winners I would like to thank all those who put their work forward for consideration. It has shown me how much excellent work is being undertaken, how many publications and grants are being secured, and how many accolades are being won.’

The Research Prizes scheme has generated considerable interest across the University since its launch in 2014 and this year 44 applications from 13 of the University’s Schools were submitted.

Overall research prizes this year were awarded as follows:

SPS are lucky enough to not only have Professor Podoleanu win the overall Prize for Advanced Research, but also to have Dr Jennifer Hiscock be awarded the The Faculty of Sciences Prize for Starting Research. Congratulation to both of them, and to all the research prize winners!

Further details of all the prize-winners are available on the Research Prize website.

Article originally published on the University of Kent News Centre.