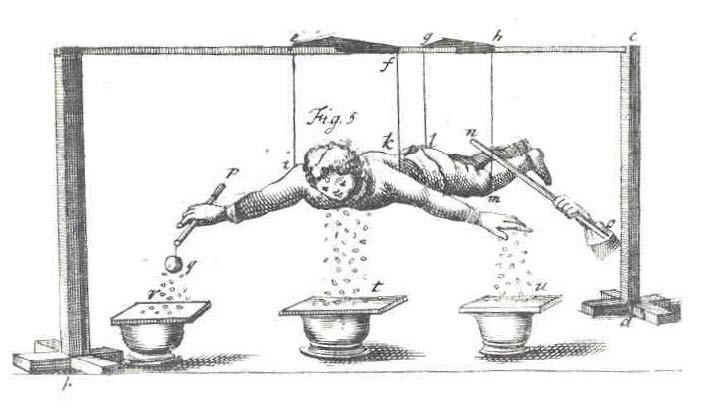 The School of Physical Sciences is proud to present a new series of lectures starting this March, the ‘Stephen Gray Lectures’. These lectures are intended to have a broader appeal than the currently-held School colloquia, and will run 1-3 times per year, featuring distinguished speakers.

The series has been named after Stephen Gray, one of the region’s most prominent physical scientists. Gray (1666-1736) was a dyer and amateur scientist from Canterbury, and made contributions to various fields including astronomy, palaeontology, biology and optics. He is best known for discovering the difference between conduction and insulation in materials; using this knowledge, in 1729 he and a colleague transmitted electricity over long distances (at Otterden Place, near Lenham) for the first time. Gray went on to make more electrical discoveries, including the theory of electrostatic induction – his “flying boy” demonstration (pictured above) was widely celebrated across Europe.

When asked about the choice of Stephen Gray to represent the new lecture series, organiser Dr Jorge Quintanilla said: “Stephen Gray made a fundamental contribution to science…his experiments established that some materials are electrical conductors and others are insulators, a distinction that has been crucial for the development of physics, chemistry and electronics to this day. He also discovered electrostatic induction, which foreshadowed the later discovery of electromagnetic induction by Faraday. Given his strong links to Canterbury it was quite a natural choice.”

The ‘Stephen Gray Lectures’ will kick off with “Stephen Gray – Canterbury’s Forgotten Hero of Science” at 3pm on Thursday 30th March 2017, Jennison Lecture Theatre, University of Kent, Canterbury. The first speaker for the series is Dr David H. Clark, who has had a wide-ranging career, including as Head of Space Astronomy at the Rutherford Appleton Laboratory, and as Director of Research and Innovation at the Engineering and Physical Sciences Research Council. He has also co-authored a book titled "Newton’s Tyranny: the Suppressed Scientific Discoveries of Stephen Gray and John Flamsteed" (W H Freeman, 2000).

The lecture will be followed by informal discussions over free refreshments in the Jennison café. Further talks will follow a similar format though will not be directly about Gray, rather having some relationship to the fields to which he contributed.

Dr Quintanilla added “We hope that when our students walk down Best Lane or Stour Street (where Gray had his dyeing businesses) they will feel inspired to make similarly momentous contributions to the development of the Physical Sciences.”