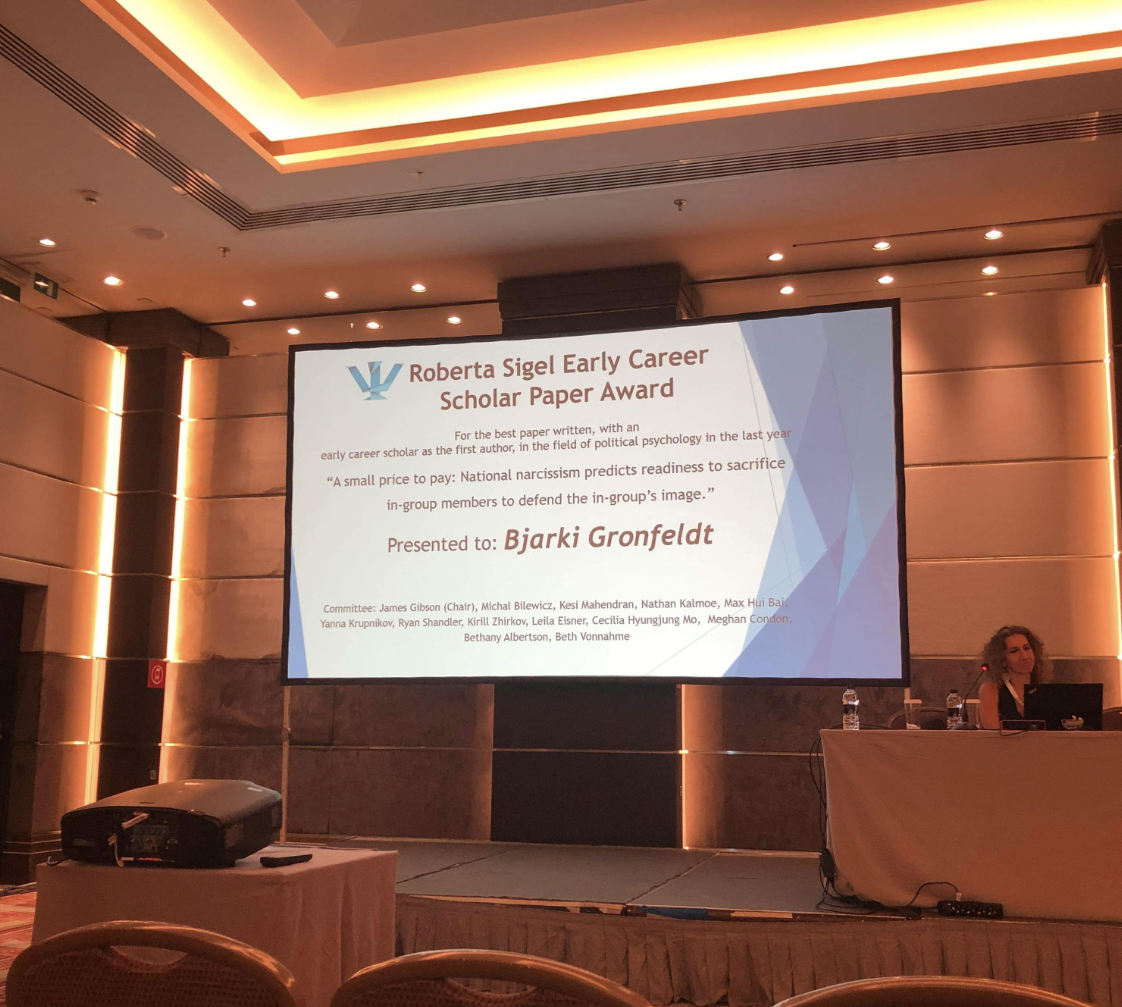 Gronfeldt was presented at the ISPP’s 2021 conference, for his co-authored paper exploring how collective narcissism was a factor in the general public’s response to Covid 19 measures.

In this paper, Gronfeldt and his co-authors found an association between national narcissism, a defensive form of national identity that craves recognition from others, and support for various harmful policy proposals regarding COVID-19. For example, national narcissism in the United States was associated with willingness to stop testing for COVID-19 to improve the US’s case numbers in comparison to others, and support for releasing an untested vaccine to beat other countries to the punch.

These effects were especially surprising as participants were explicitly told that these measures may harm compatriots. Furthermore, concerns about one’s country’s reputation in the eyes of the world seem to have driven these effects. In other words, those high in national narcissism were seemingly ready to sacrifice their compatriots in order to look strong and powerful in the eyes of others.

Gronfeldt was delighted with the award; ‘This is a prestigious award, and it attests to the quality of research we are producing at Kent. The paper was a collaborative project and I’m thankful to my supervisor, Dr Aleksandra Cichocka and our co-authors, for embarking on this journey of investigating sacrificial attitudes towards compatriots. Our research was inspired by real life events, and the original idea came about when we noticed early on in the COVID-19 pandemic that calls were made to minimise the response to the virus or downplay its severity.’

‘We suspected that defensiveness about one’s national identity could play a role in this: In order for the country not to look bad, some citizens would be ready to support drastic measures. Indeed, we confirmed our suspicion in three different contexts, at three different time points in the pandemic. I hope that our paper helps people understand why those who declare love for a nation might sometimes be ready to harm its people.’

Scientific understanding of narcissistic defensiveness about national groups, and other social groups, is growing. Such psychological insights are imperative in findings new ways to counter or reduce the harmful effects documented in our paper, and many others. As of now, a feasible intervention is yet to be discovered. In our times, when populism has not just grown in support, but seems to have become a permanent political force in many countries, finding ways to attenuate prejudice and hostility towards others is a compelling topic for all social sciences. Our paper demonstrates that narcissistic national identity is not merely related to hate towards others, but can relate to destructive attitudes towards other members of the national group too. This puzzling finding only underlines further the need to find such a psychological intervention.’