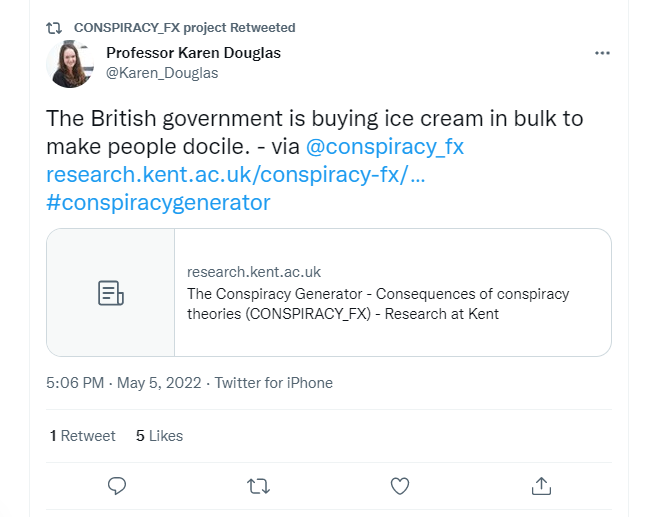 Seen some bizarre tweets from the School of Psychology staff recently? It might be the work of the Conspiracy Generator.

The rise of conspiracy theories is often framed as a cause of various social ills such as declining public trust in democracy, the growing allure of populist and extremist politics, and the rejection of scientific consensus in favour of hearsay and fake news.

CONSPIRACY_FX  is a five-year European Research Council funded project with the School of Psychology at Kent, addressing the issue of conspiracy theories: who starts them and when and how do conspiracy theories become influential. Their random conspiracy generator aims to demonstrate how easy it is to come up with a conspiracy theory and how fast it can spread. Put together with the help of Senior Technical Specialist  Frank Gasking the generator assembles a ‘Protagonist’, an ‘action’ and a ‘motive’ to create this unique piece of fake news and the option to share it directly on Twitter. ‘It demonstrates how easy it is for a conspiracy theory to manifest and take hold and how far it can travel.’ Professor Karen Douglas, Director of the project told us.

Generate your own conspiracy here.