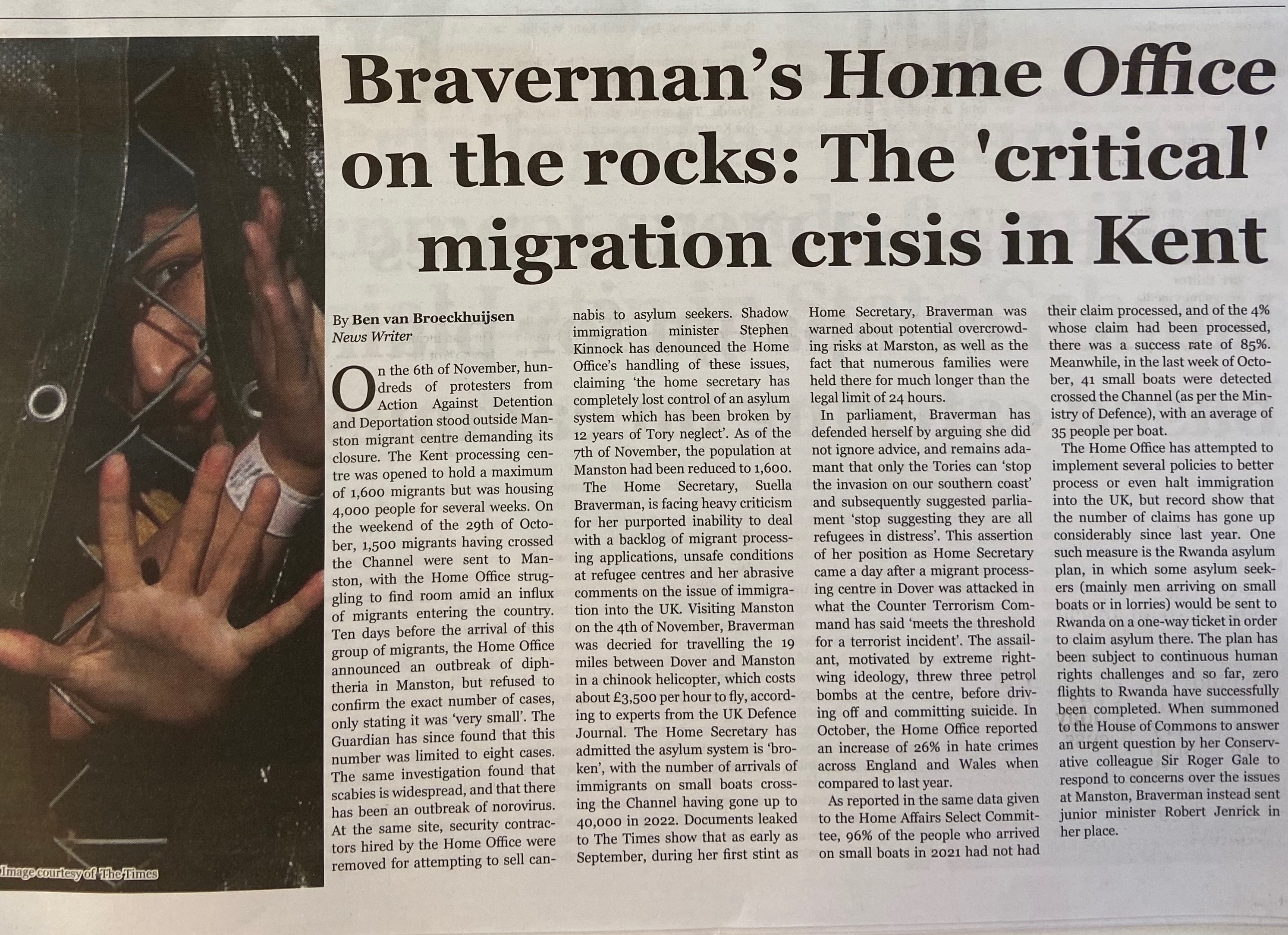 ‘On the 6th of November, hundreds of protesters from Action Against Detention and Deportation stood outside Manston migrant centre demanding its closure. The Kent processing centre was opened to hold a maximum of 1,600 migrants but was housing 4,000 people for several weeks. On the weekend of the 29th of October, 1,500 migrants having crossed the Channel were sent to Manston, with the Home Office struggling to find room amid an influx of migrants entering the country. Ten days before the arrival of this group of migrants, the Home Office announced an outbreak of diphtheria in Manston, but refused to confirm the exact number of cases, only stating it was ‘very small’. The Guardian has since found that this number was limited to eight cases. The same investigation found that scabies is widespread, and that there has been an outbreak of norovirus. At the same site, security contractors hired by the Home Office were removed for attempting to sell cannabis to asylum seekers. Shadow immigration minister Stephen Kinnock has denounced the Home Office’s handling of these issues, claiming ‘the home secretary has completely lost control of an asylum system which has been broken by 12 years of Tory neglect’. As of the 7th of November, the population at Manston had been reduced to 1,600.

The Home Secretary, Suella Braverman, is facing heavy criticism for her purported inability to deal with a backlog of migrant processing applications, unsafe conditions at refugee centres and her abrasive comments on the issue of immigration into the UK. Visiting Manston on the 4th of November, Braverman was decried for travelling the 19 miles between Dover and Manston in a chinook helicopter, which costs about £3,500 per hour to fly, according to experts from the UK Defence Journal. The Home Secretary has admitted the asylum system is ‘broken’, with the number of arrivals of immigrants on small boats crossing the Channel having gone up to 40,000 in 2022. Documents leaked to The Times show that as early as September, during her first stint as Home Secretary, Braverman was warned about potential overcrowding risks at Marston, as well as the fact that numerous families were held there for much longer than the legal limit of 24 hours.

In Parliament, Braverman has defended herself by arguing she did not ignore advice, and remains adamant that only the Tories can ‘stop the invasion on our southern coast’. She subsequently suggested Parliament should ‘stop suggesting they are all refugees in distress’. This assertion of her position as Home Secretary came a day after a migrant processing centre in Dover was attacked in what the Counter Terrorism Command has said ‘meets the threshold for a terrorist incident’. The assailant, motivated by extreme right-wing ideology, threw three petrol bombs at the centre, before driving off and committing suicide. In October, the Home Office reported an increase of 26% in hate crimes across England and Wales compared to last year.

As reported in the same data given to the Home Affairs Select Committee, 96% of the people who arrived on small boats in 2021 had not had their claim processed, and of the 4% whose claim had been processed, there was a success rate of 85%. Meanwhile, in the last week of October, 41 small boats were detected crossing the Channel (as per the Ministry of Defence), with an average of 35 people per boat.

The Home Office has attempted to implement several policies to better process or even halt immigration into the UK, but records show that the number of claims has gone up considerably since last year. One such measure is the Rwanda asylum plan, in which some asylum seekers (mainly men arriving on small boats or in lorries) would be sent to Rwanda on a one-way ticket in order to claim asylum there. The plan has been subject to continuous human rights challenges and so far, zero flights to Rwanda have successfully been completed. When summoned to the House of Commons by her Conservative colleague Sir Roger Gale to respond to concerns over the issues at Manston, Braverman instead sent junior minister Robert Jenrick in her place.’

This article was originally published in The University oF Kent’s Student Publication InQuire.

Benjamin Van Broeckhuijsen is studying for a Degree in Politics and International Relations BA (Hons).
The views expressed in this blog are not necessarily those of the University of Kent. More about Kent blogs and blogging guidelines. Report concern