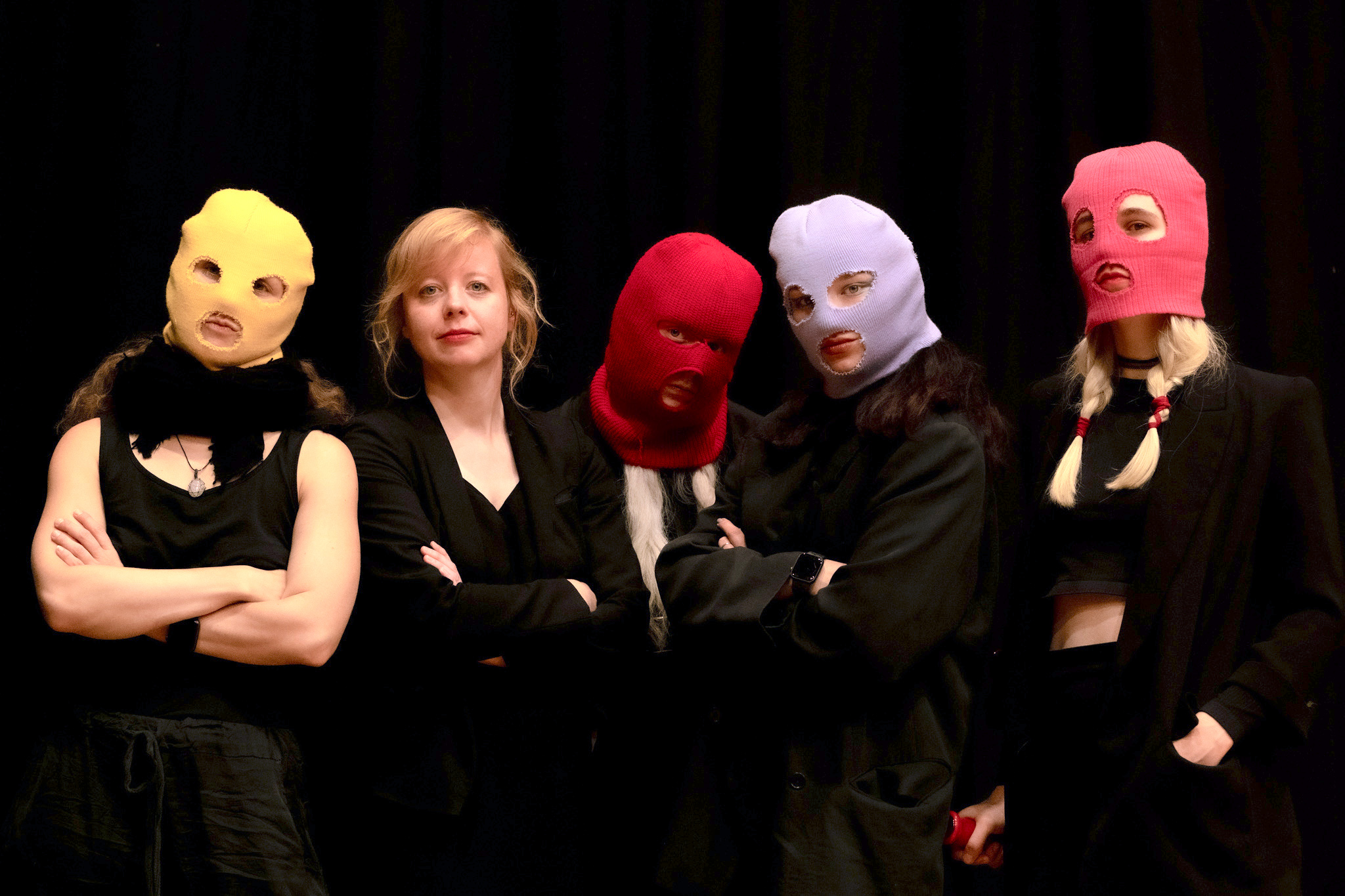 Our school year kicked off with some riotous energy courtesy of the Russian Art-Performance Putin-Opposing collective, who brought their immersive show ‘Riot Days’ to the Gulbenkian Arts Centre on campus, and met with our Head of School Nadine Ansorg. Student Meg Payne writes about their inspiring visit here.

‘To have Pussy Riot at our very own Gulbenkian Theatre was a pleasure, to listen to them speak about their work, the motivations behind it, and the bravery and determination needed to achieve what they have so far, was an honour.

Riot Days was certainly a spectacle; electro-punk music performed whilst wearing their iconic coloured balaclavas, against a backdrop of hard-hitting visuals of their story, their activism, Putin’s face, drenching the audience with water, it was a completely immersive and arresting experience. But beneath Pussy Riot’s dynamic, punky, and creative exterior, is a story of courage and inspiration, with 3 of its members having been arrested and later imprisoned for ‘hooliganism motivated by religious hatred’ in 2012 following one of their performances, and recognised as prisoners of conscience by Amnesty International due to the severity of the response of the Russian authorities.

During their Kent residential we had the opportunity to ask them questions at a Q&A, chaired by Head of School, Dr Nadine Ansorg.  Every member expressed their sorrow at the situation in Ukraine, their outspoken opposition has once again put them in danger of imprisonment in Russia -half the proceeds from their tour tickets and merchandise are going to the Ohmatdyt Children’s hospital in Ukraine, emphasising not only the need for activism, but also illustrating their philosophy that ‘each voice is important, even if you only do something small’. This is an important lesson to learn. As politics students and people who want to enact change, we can often feel a sense of powerlessness and frustration, that our activism doesn’t appear to be achieving all the changes we wish to see right now. Even though Pussy Riot are an example of organising something that came to have massive global impact, all activism is important, whatever the scale, and finding your own creative way to channel this activism is just as important, as the band stresses.

‘I believe you study something here, so please study one thing: believe in yourself and believe that each of your gestures is very important. You can do your own riots, you can make your own change, and it all adds to a very big impact that we are all doing.’ Maria “Masha” Alyokhina

Despite the dire political situation in their home country of Russia, Pussy Riot’s members still have hope for its future. Original member of Pussy Riot and author of Riot Days, a memoir based on her arrest, Maria “Masha” Alyokhina says she hopes that political prisoners will one day be free, and that Putin will be tried in the Hague. Until then, Pussy Riot will continue to travel across Europe, spreading their message of feminism, activism and inspiration to others like me.

‘The work and writings of Pussy Riot are as timely as ever.’ Dr Ansorg concluded ‘During their time here at Kent, these courageous women have shown us how important it is to stand up for your rights, and for the rights of oppressed people, to not hide behind ignorance, or behind the cosy light of our laptop and phone screens. They showed us that we need to get out onto the streets and into the centres of power to protest injustices in the world. They also showed us that we need to critically engage with our own indirect involvement in conflicts all over the world. They are role models for all of us, and I hope that they will inspire lots of our students to start changing the world themselves.’