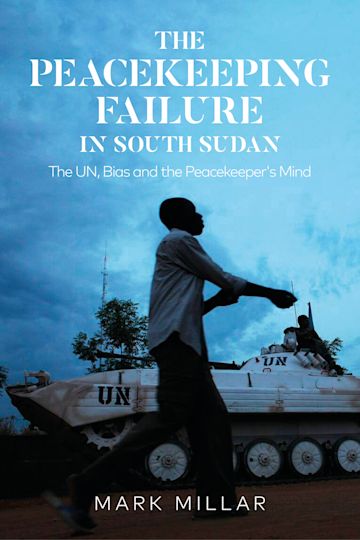 Mark Millar publishes his first title, based on research conducted while studying for his MRes here at Kent.

This month sees the launch of The Peacekeeping Failure in South Sudan, The UN, Bias and the Peacekeeper’s Mind, the first title of Mark Millar, published by Bloomsbury.

The work was conducted during Millar’s MARes in International Conflict Analysis here at Kent, with Dr Nadine Ansorg acting as supervisor, along with Ingvild Bode, University of Southern Denmark.

In 2011, South Sudan was welcomed into the United Nations as the world’s newest nation. Celebrations on the ground reflected palpable relief after more than 20 years of violent struggle. With unprecedented goodwill and optimism, the UN deployed 7,000 soldiers and another 2,000 police and civilian peacekeepers to the country to support its transition to independence. However, the mission failed and within less than three years South Sudan was plunged into a catastrophic civil war.

Millar explained the motivation behind the work:

‘After years of working in South Sudan doing conflict analysis, including for the peacekeeping mission, I grew frustrated. The common complaint from was that we couldn’t see violence coming and even if we did we couldn’t stop it. My experience was that we could see it and often we could stop it. The reasons we didn’t were much more complex and related to how our decision makers viewed the world and their role in it.’

Millar uses first-hand accounts from senior UN officials and referencing hitherto unseen UN documents to explore the role of the peacekeeping mission in that failure. He challenges the resignation with which many in academia and the media greeted the underperformance of the peacekeepers, suggesting that, even while under-resourced, they could have done much more to prevent bloodshed and protect civilians.

‘I’m hoping we can move the discussion along from simply how UN peacekeeping is resourced or its framework.’ Millar told us ‘We need to talk more about how they are performing within their constraints, which currently is not good enough. That’s a lot to do with how the UN as an organisation operates. The impact of better peacekeeping decision making will simply be more conflicts prevented and more lives saved.’