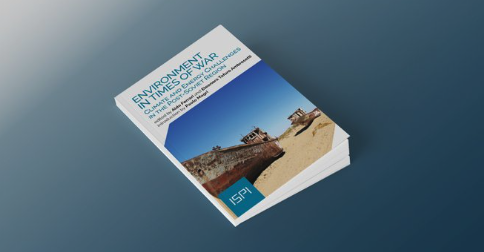 The impact of Russia’s war vs Ukraine is politically & environmentally devastating. It has also shifted attention away from climate & environmental crises, which are v acute in the post-Soviet region. The subject of IPSI’s latest report. The latest IPSI Report was commissioned before the war started. Since February, Russia’s invasion of Ukraine has upended our world.

‘It is therefore a tragic irony that it deals with environmental problems in the post-Soviet region. And it is a testament to how unpredictable the invasion was until late last year, and how unprecedented its effects, that the Report does not touch upon hydrocarbon resources apart from a single chapter.’ write Aldo Ferrari and Eleonora Tafuro Ambrosetti in their editorial.

‘After a long period of ambivalence if not outright denial about anthropogenic climate change, in the early 2020s Russia radically changed its stance.’

Professor Richard Sakwa’s piece “Russia’s Green Shift and What It Means for Neighbouring Countries” opens the volume. This switch was due to internal factors (Russia’s vulnerability to extreme weather and climatic events) as well as external ones, above all the European Union’s green agenda and carbon taxes, which are set to shrink future EU demand for Russia’s fossil fuels. Hence, Russia devised new energy and climate strategies, at the same time seeking to maintain its position as one of the world’s leading energy exporters and its competitive economic advantage. Russia’s invasion of Ukraine in February 2022 changed it all: Western powers’ decarbonisation efforts, plans to reduce imports from Russia and energy-related sanctions put the entire green shift in question.