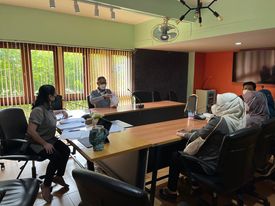 Dr. Margherita Belgioioso was awarded the HFG Distinguished Scholar Award last year to undertake this research in Southern Thailand. Here she updates us about the progress and the her hopes for the impact of the study.

‘Do you remember my project ‘Rebel Tactics, Local Public Support and the Upcoming Phase of the Peace Talks in Southern Thailand’, funded earlier this year by the Harry Frank Guggenheim Foundation?

We are now running the cognitive tests for our survey experiments in the conflict affected areas of Southern Thailand! We will investigate the effect of different violent and nonviolent tactics on the support that rebel organizations and that their leaders enjoy among the local population.

Very few studies have explicitly tested the effect of rebel tactical choice on public opinions. Our findings will talk to a broad range of rationalist literature on rebel financing, governance, and tactical choice of dissent that assume that leadership cadres of rebel groups take rational decisions on their portfolio of violent and nonviolent tactics weighing the financing, organizational, and strategic benefits of each tactic against potential costs/benefits that a given tactic might have in terms of local support.

Our findings have a practical and timely value: they can contribute to shape successful peace talks between the Thai government and rebels. This is because the support to rebel groups among the local population is a crucial factor for determining whether rebels can be deemed as credible bargaining partners and can commit to stable peace talks and effective implementation of peace agreements.

Follow me and my co-author Kathleen Gallagher Cunningham on Twitter for more updates on the project proceedings!’

Dr. Margherita Belgioioso was been awarded the HFG Distinguished Scholar Award to study how rebel tactics affect local public support for rebels and their leaders, advancing the growing experimental knowledge on the effect of rebel tactical choice on public opinions and to provide stakeholders in the peace dialogue in southern Thailand with systematic evidence to infer the levels of legitimacy that different rebel groups involved in the civil war have with the local population.